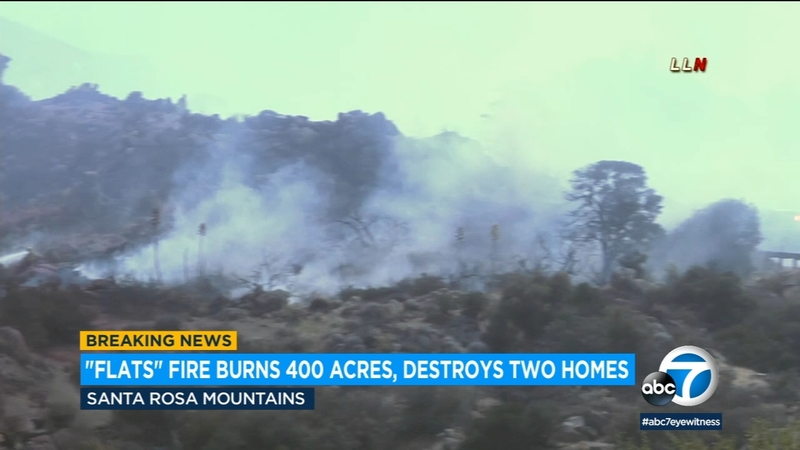 PINYON PINES, Calif. (KABC) -- A wildfire in the Santa Rosa Mountains has burned at least 400 acres, prompting a mandatory evacuation order for the Pinyon Crest area and the partial closure of State Route 74 Sunday.

By around 5 p.m., firefighters said they had stopped the forward rate of spread of the Flats Fire, but weather and terrain issues continue to remain challenges.

Evacuation warnings were also issued for the nearby communities of Pinyon Pines and Alpine Village.

Firefighters say at least two homes were destroyed and three were damaged, in addition to three damaged outbuildings.

One firefighter was injured and was transported for medical evaluation.

A wildfire in the Santa Rosa Mountains prompted a mandatory evacuation order for Pinyon Crest and the partial closure of State Route 74 Sunday.

About 400 firefighters were assigned to battle the flames.

Flames were first reported about 11:05 a.m. west of the Pinyon Flat campground in the Santa Rosa and San Jacinto Mountains National Monument about eight miles south of Palm Desert, according to the California Highway Patrol.

Evacuations remain the same as the above tweet. pic.twitter.com/6kvPjaxTVD

U.S. Forest Service and Riverside County firefighters responded to the fire, which was spreading at a moderate rate and jumped State Route 74 in a northeasterly direction.

State Route 74 was shut down in both directions between Palowet and Ribbonwood drives.

The public is advised to avoid the area.