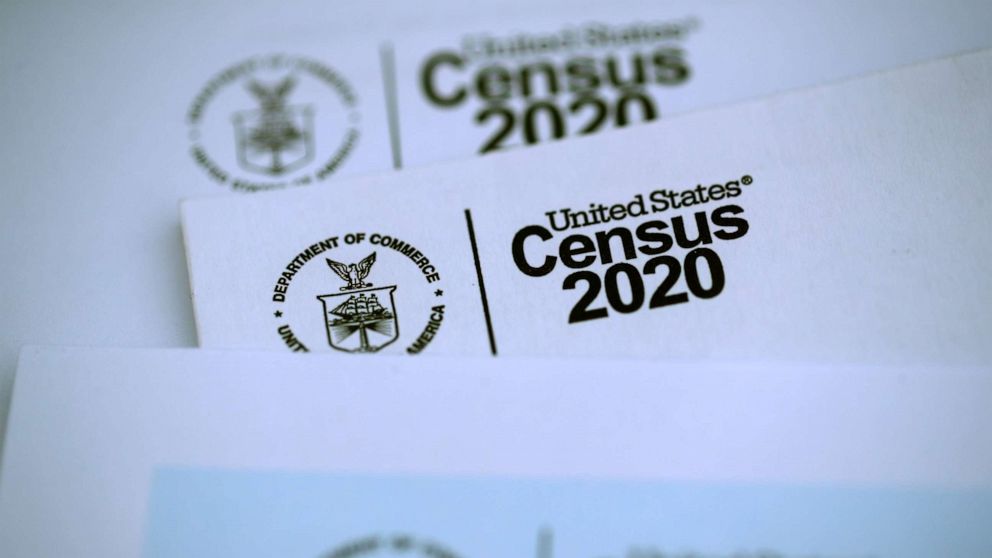 The U.S. Census Bureau released the first batch of data from the 2020 census, kickstarting the once-a-decade redistricting battle after months of delays put the process on uncharted terrain before next year's midterm elections.

In the last decade, the total U.S. population rose to 331,449,281, a population increase of 7.4% since 2010, marking the second slowest growth rate in the country's history, according to the Census Bureau.

The apportionment data delivered on Monday, based on the 2020 census count, outlines crucial top-line numbers for determining which states gain or lose seats in the U.S. House of Representatives.

Six states are set to add seats, seven states will each drop one seat and the number of seats in the remaining 37 states will not change, Dr. Ron Jarmin, acting director of the U.S. Census Bureau announced on Monday. The average population size of each congressional district, based on the 2020 census, will be 761,169 people, which is an increase of 50,402 people compared to the last census.

"This is a unique ritual that has occurred only 23 other times in American history. I assured the president that the census was complete and accurate," Secretary of Commerce Gina Raimondo said during the virtual press conference before the numbers were released.

With the size of the House limited to a fixed 435 seats, the 2020 census underlines a shift in political power towards the south and west. The states scaling down by one seat are mostly across the Midwest and northeast and were carried by President Joe Biden last year, including: California, Illinois, Michigan, New York, Ohio, Pennsylvania and West Virginia. California is losing a seat for the first time.

Minnesota clinched the 435th seat in the House over New York. Officials told reporters on Monday that if 89 more people were counted in New York, and holding all other state populations constant, Minnesota would have shouldered the loss.

In a state where Democrats hold a supermajority in the state legislature, the loss of one seat in New York could strip a district from one of the eight Republican House members. But GOP Rep. Tom Reed, who represents a district in upstate New York, is retiring after claims of sexual misconduct and another Republican, Rep. Lee Zeldin, whose district covers eastern Long Island, launched a bid for governor earlier this month.

Zeldin is not the only one running for higher office this year. In Ohio and Pennsylvania, two battlegrounds with open Senate seats next year, both are losing a seat -- leading some members, who could see their district disappear or become far redder in the mapmaking process, to consider or pursue statewide bids. Democratic Rep. Tim Ryan, whose district currently stretches from Akron to Youngstown, announced a campaign for Senate on Monday, a long-speculated move since he is widely seen as a vulnerable member in the redistricting process.

Meanwhile, the Sun Belt is earning significant gains this cycle, particularly in states former President Donald Trump won. Texas is expanding to add two seats, the largest boost for any state. Florida and North Carolina, two competitive swing states in the last election, are both picking up one seat along with Colorado, Montana and Oregon.

Under the reapportionment data, Biden's edge in the Electoral College would have slightly narrowed to 303-235 from 306-232, according to FiveThirtyEight.

The initial, and long-awaited, trove of data -- which includes a tally of each state's population to reapportion congressional seats and votes for the Electoral College -- comes after the coronavirus pandemic and interference from the Trump administration delayed the process and muddled plans for 2022. The more granular data that includes demographic details that is used to draw the contours of new congressional and state legislative districts isn't expected until the early fall.

With the House more narrowly divided than it's been in two decades, a reshuffling of the political map is anticipated to have an outsize influence in the fight for control of the chamber, particularly with Republicans holding an advantage in both 2022 races and redistricting. History favors the party out of power in midterms and the GOP will control the drawing of new lines in 18 states, compared to just seven for Democrats, according to the Brennan Center for Justice.

The contentious process is also likely to be one of the most challenging in recent history, even with at least six states reforming the redistricting process ahead of the cycle, including some that shifted the responsibility for drawing maps to nonpartisan commissions -- seeking to insulate the process from politics.

For officials charged with drawing the new district lines, receiving population figures this year from the Census Bureau is a pivotal step. The first set of data were initially expected to arrive in December, though, before the pandemic, partisan divisions and the Trump administration's attempt to block undocumented immigrants from being counted in the census paralyzed the process.

With the effort now moving forward, several states are still fretting over crashing into their own existing statutory or constitutional deadlines, including more than a dozen that are expected by state law to undergo the redistricting process the year after the census. Some states are looking to possibly push back candidate-filing periods or move the dates for primaries to afford more time for map-drawing and periods for public input, which could further complicate next year's races.

The announcement on Monday is likely to bring some much-needed clarity to the two parties and campaigns about the shape of the 2022 map, but the delivery of the long-overdue figures for drawing new maps isn't set to occur until September -- six months after the initial target date.