2 Americans freed from militant group in Yemen, returning to US 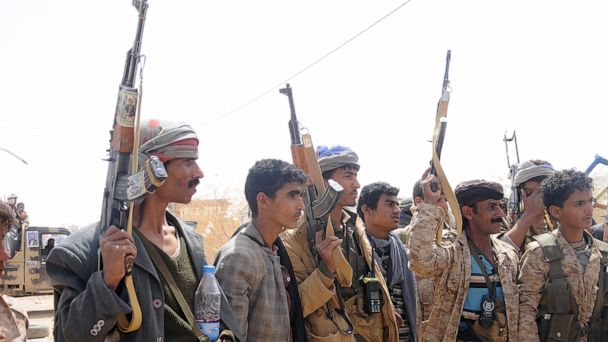 Two Americans have been freed and the remains of a third American have been released by the Houthis, an Iran-backed rebel group in Yemen, as part of an exchange, national security adviser Robert O'Brien confirmed Wednesday.

"The United States welcomes the release today of U.S. citizens Sandra Loli and Mikael Gidada from Houthi custody in Yemen. We send our condolences to the family of Bilal Fateen whose remains will be repatriated as well," O'Brien said in a statement.


Loli is an aid worker who had been held for three years in the war-torn country, and Gidada, a businessman detained last year, a U.S. official confirmed. In exchange for their release, more than 200 Houthi fighters in neighboring Oman have been allowed to return to Yemen after Saudi Arabia had previously blocked their travel, the official added.

Fateen "died during his unlawful captivity," Kieran Ramsey, director of the U.S. Hostage Recovery Fusion Cell (HRFC), said in a statement, although it's unclear how long he had been held.

"The wellbeing of the two recovered victims, the respectful care of the remains of the deceased American, and the devotion of the HRFC to all three American families remain at the core of our mission," Ramsey added.

Loli and Gidada have not yet returned to the U.S., according to a second U.S. official, who added they are first undergoing medical checks, but will be headed home in the next 24 to 48 hours. Loli, in particular, is reported to have been in declining health.

Yemen, the size of California and home to over 29 million people, faces the world's worst humanitarian crisis -- on the brink of starvation and reeling from COVID-19, cholera, malnutrition and the destruction of hospitals. After over five years of war, fighting remains deadlocked between the Houthis and the Yemeni government, backed by Saudi Arabia, the United Arab Emirates and their coalition, whom the U.S. continues to arm despite allegations of war crimes.

At the request of their families, none of these three detainees' cases had been publicly known before, according to several officials knowledgeable about the resolution of their captivity.


The first U.S. official confirmed that the Saudis had initially opposed the deal because it puts over 200 Houthi militants -- reportedly trained by Iran -- back on the battlefield after they received medical care in Oman, but the official said the U.S. worked to ensure these fighters didn't pose a "major risk."

"We had teams on the ground in both locations (Yemen and Oman) to ensure that there was a proper screening conducted of the people going back and that the cargo manifest was inspected so we could ensure the Saudis that no lethal aid was being provided and no known terrorist was being sent back," Kash Patel, senior director on counterterrorism at the White House National Security Council, told the Wall Street Journal, which first reported the news.

The Wall Street Journal reported the deal also included some "medical aid" to Yemen, which the U.S. official confirmed without offering more details. The U.S. has withheld millions of dollars in aid to northern Yemen where 80% of the country's population lives as a way to pressure the Houthis, which have consistently stolen or redirected humanitarian assistance.

But aid groups have warned that the U.S. policy and a lack of funding from other countries are having a dire effect amid desperate need in the country, as ABC News reported a few weeks ago. In 2020, humanitarian aid has dropped, with just 40% of the funds needed for clean water, food, shelter and medicine being met, according to the United Nations.

Last week, the international aid group Oxfam reported that more than a third of the U.N.'s humanitarian programs have been cut back, with some completely shut down between April and August due to funding shortages. Those cuts mean reducing services at 300 health centers and in food distributions across the country.
Report a correction or typo
Related topics:
abc newsnational
Copyright © 2020 ABC News Internet Ventures.
More Videos
From CNN Newsource affiliates
TOP STORIES