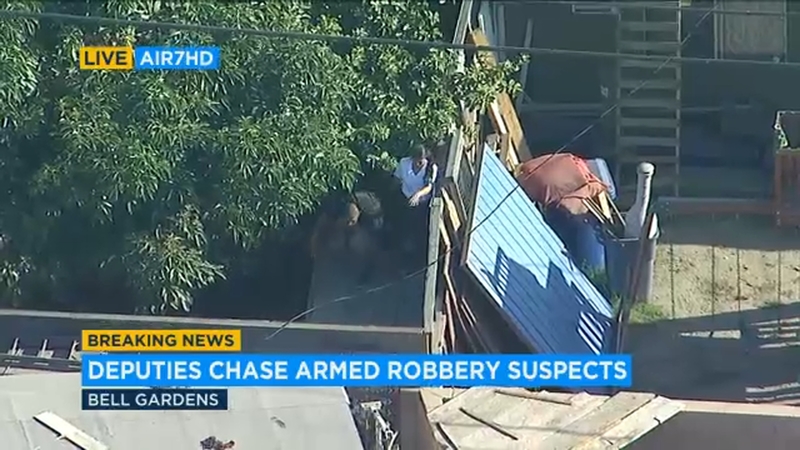 2 arrested after chase from East LA to Bell Gardens

BELL GARDENS, Calif. -- Two possibly armed suspects fled sheriff's deputies in a dangerous chase from East Los Angeles before they were caught on foot in a Bell Gardens backyard.

The suspects weaved through surface street traffic, heading in the direction of oncoming cars and even getting other drivers to drive onto the sidewalk to move out of their way as they fled.

The chase began just before 5 p.m. after a report of an attempted armed robbery in the area of Union Pacific Avenue and Indiana Street in the East Los Angeles area.

They fled through the Montebello and Downey areas before exiting the vehicle in a residential neighborhood of Bell Gardens.

At that point, the two suspects jumped out of the car. The suspects appeared to be a young man and woman, possibly in their teens or 20s. The woman was the driver.

They ran through backyards and jumped from roof-to-roof in an effort to elude deputies.

But eventually they ran out of places to escape and decided to surrender.

The two suspects got down from the roof and were taken into custody without further incident.
Report a correction or typo
Related topics:
east los angeleslos angeleslos angeles countypolice chasehigh speed chase
More Videos
From CNN Newsource affiliates
TOP STORIES