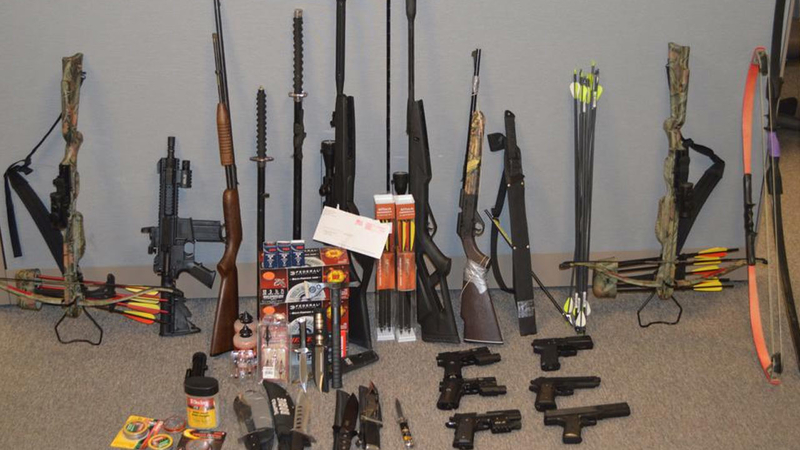 YUCCA VALLEY, Calif. (KABC) -- A student has been arrested for allegedly threatening to shoot, stab and assault staff members at a Yucca Valley school.

The threat was made on Tuesday at Black Rock High School, which is a continuation school. Deputies say a teacher overheard 18-year-old Matthew Isaiah Ross threatening to kill three teachers, and those teachers were mentioned specifically by name.

It was reported immediately to the school principal, who then called the sheriff's department.

A search warrant was served on Wednesday at the student's house in the 7700 block of Sahara Avenue in Twentynine Palms, where deputies located a loaded rifle, hundreds of rounds of ammunition, large hunting knives and crossbows.

Ross was subsequently arrested at the high school for making criminal threats. He was booked at the West Valley Detention Center in Rancho Cucamonga and was held on $50,000 bail.

Deputies say the suspect lives with his father, but he admitted that most of -- if not all -- the weapons belonged to him.

The suspect's brother says he didn't mean to hurt anyone.

"He is temperamental, but he's no threat to society. He's a good kid, he does get angry, we all get angry sometimes," James Ross said.

Authorities stressed that while three teachers had been threatened, no students were threatened. It was business as usual at the school on Thursday, but extra security was provided as a precaution.