Inside the discovery of Mike Trout 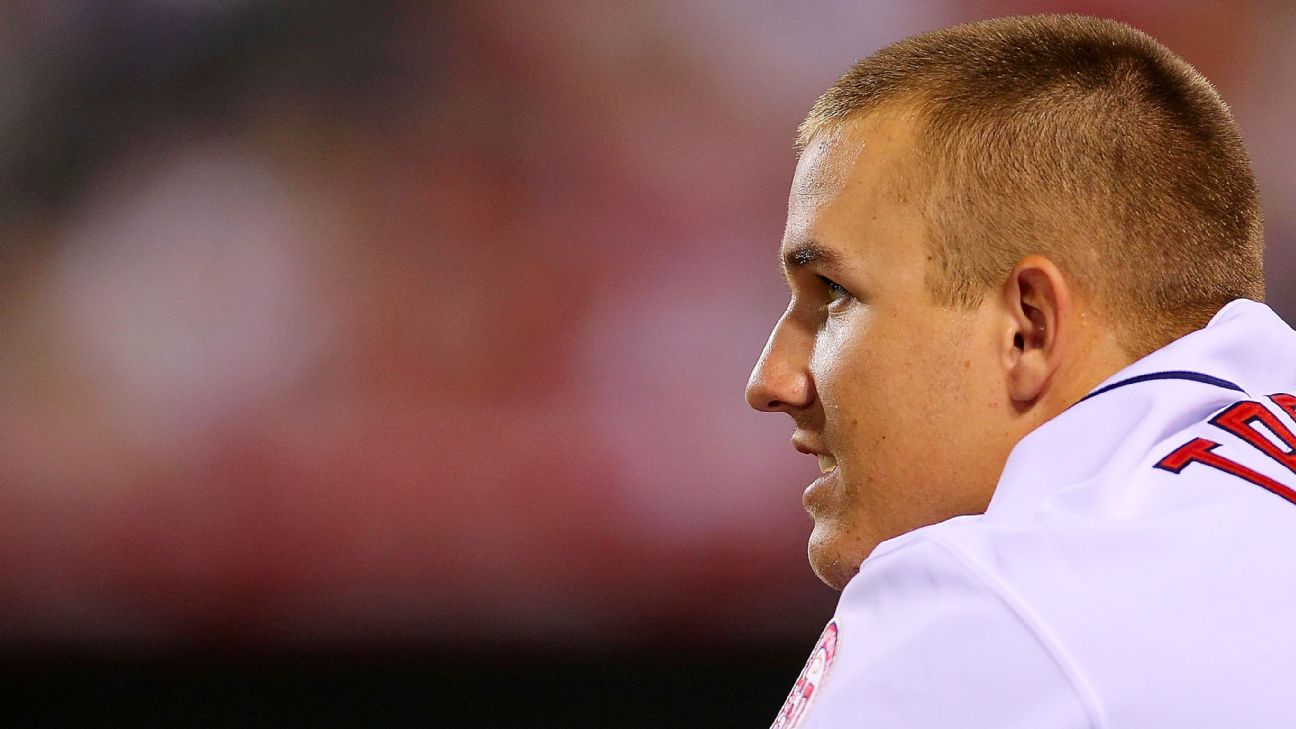 Greg Morhardt was the Los Angeles Angels' scout assigned to oversee the Northeast corridor a dozen years ago, and on a beautiful, late-summer day, he watched over a flock of high school age ballplayers in New Jersey. When somebody mentioned that the last name of the muscular kid with the football-player build standing out at shortstop was Trout, Morhardt immediately wondered whether he had a connection with the teenager.

More than two decades before, Morhardt had played minor league baseball with a Trout, Jeff Trout. He was fast, Morhardt recalled, and a really good hitter, someone who might have had a little time in the big leagues if he had hung around pro ball a few more years. But Morhardt had been present when Jeff met Debbie Busonick, and Jeff and Debbie married, moved beyond the uncertainty of minor league baseball and returned to Jeff's hometown in southern New Jersey to raise a family.

That was the last Morhardt had heard of his old teammate. Now Morhardt was at a ballfield tracking this teenager with the last name of Trout -- in Jersey. It had to be more than a coincidence, he thought. "Is that Jeff Trout's kid?" Morhardt asked somebody else at the workout, and he was told, yes, that's Jeff and Debbie's son. That's Mike Trout.

Morhardt's reunion with the former teammate he called Trouter would have to wait, however, because Jeff was not hovering over his son that day. Morhardt and Jeff Trout didn't talk again until another day, another time. Jeff was not at a lot of Mike's high school workouts and practices, in fact.

Jeff Trout had set all the Millville High School records that Mike would break, he had starred at the University of Delaware, he had played four years in the Minnesota Twins' farm system, hitting .321 and posting a .406 on-base percentage in 1986, and he coached at Millville High School. But as Mike Trout advanced in baseball and began to draw the attention of Morhardt and other scouts, Jeff Trout made the decision to step back from coaching his son.

Major League Baseball will forever be played by a lot of young men whose fathers have coaxed and nudged them through every swing of every inning of every game. Truth be told, some of the same players have felt smothered by the omnipresence of their fathers, some of them haunted as they tried and sometimes failed to live out the dreams of someone whose love they cherished.

Mike Trout is not one of those players.

When Mike reached the ninth grade and began to create a future in baseball, generating awe in scouts such as Morhardt with his speed, Jeff and Debbie Trout attended his games in lawn chairs, captured video, cheered for Mike and his teammates -- and left the instruction and coaching of their son to others, a calculated distance that remains in place today.

"I know he's already got a lot of pressure, a lot of people coming at him," Jeff Trout said. "There's no sense in us adding to that."

Mike is the youngest of three children, following Teal and Tyler, and Jeff and Debbie Trout encouraged their three children to play whatever sport they wanted.

"I think part of the job of being a good parent is to find out what your kid's passions are and try to encourage them to succeed and do well in them and follow their gut," Jeff Trout said, "and give them the opportunities to do well in what they like to do."

Jeff Trout was a history teacher, and he had been the head coach at Millville High School until about the time Mike began his climb through youth sports. When Mike reached his freshman year, Jeff did not try to get involved with the baseball team. "He had heard what he needed to hear from me baseball-wise by the age of 13 or 14," Jeff said.

Rather, Jeff left the coaching of his son to Roy Hallenbeck and Kenny Williams, the head coach and assistant at Millville High School. Hallenbeck had known the Trouts for years. He had helped when Jeff was the head coach, when Mike was 6 or 7 years old, racing around the Millville practices, happily begging for somebody to pitch to him. Because of that experience around the Trout family, Hallenbeck was not surprised Jeff retreated.

"But it was refreshing," Hallenbeck said, "because he had every right in the world with a résumé that he had as a coach, as a player, as an All-American at Delaware and when he played in the Twins organization.

"He was way more qualified than I was at the time to diagnose problems or whatever. And he never did. He allowed Mike to step back and fix things. He allowed us to help. And he really just stepped back. That showed a lot of trust -- it's something that Kenny and I will never forget or repay is that trust that he put on us."

The space, Jeff believes, "probably served him well. Not to have Dad there watching over him all the time and breathing down his neck. Not that I ever was overbearing that way, but I think it helped his independence."

Mike Trout says now that he realized what his father was doing, and with the benefit of hindsight, he believes it was exactly the right thing for him.

"Because you're always talking about pressure, and if he's your coach, you want to be so good, and that means he's putting pressure on you to do good," Mike Trout said. "You know the things he's teaching you, and you are going to put pressure on yourself [to do them]."

Said Kenny Williams: "Mike just played. He never felt pressure from his mom and dad. All they did was support him, and [they] certainly made it easier."

The Angels possessed the 24th and 25th picks in the draft in 2009, when Mike Trout was a 17-year-old high school senior, and Morhardt made his case to the team that they should take the outfielder. In a report filed to the Angels on April 19, 2009, Morhardt's words were all capitalized, and he compared Trout's body type to that of an NFL defensive back. "NATURAL STRENGTH WITHOUT LIFTING A WEIGHT," he reported. "AMAZINGLY STRONG! HE SHOULD BE M.L. [Major League] PLAYER BY [age] 20-21."

Morhardt was even more emphatic when speaking to fellow scouts, comparing Trout, his speed and his power to that of a star Morhardt had met as a teenager. "I think I've got Mickey Mantle up here," Morhardt told another scout. "Wait 'til you see this one."

Morhardt, who now scouts for the Atlanta Braves, recalled, "When you watched his makeup on the field and his physical ability, you knew that when he struggled with something, it wasn't going to last very long. You knew he was going to work hard.

"He had that -- I don't know if you want to say killer instinct -- but he had that mentality of, 'I'm going to conquer this hurdle.' He was ahead of us coaches or scouts. He was very respectful, and he'd say something like, 'Yeah, Coach.' But you knew he was going to go past all of the instruction, and he was going to do it the way how he knows to do it the best. It's like a great pianist or a mathematician. Mike was advanced further than the people who were coaching him."

A few hours before the draft, Angels scouting director Eddie Bane called Morhardt one last time to ask him again about Trout, to get assurances that Trout would want to sign to play pro ball if he were drafted, rather than attend the college to which he had committed, East Carolina.

When a scout reports to his team on a player, he is expected to go beyond an evaluation of the player's ability, beyond his speed or power. He is expected to have some sense of the kid's background, his motivation, his emotional stability, his family.

Bane would not tip his hand to Morhardt as to whether the Angels would draft Trout; that was top-secret information, especially for a team that would have to wait out 23 picks before its first shot at him. And the Angels knew that Oakland's Billy Beane had seen Trout in person, as had the Giants' Brian Sabean.

Absolutely, Morhardt assured Bane, Mike Trout would sign if he were drafted.

The family and the kid's makeup? Of course he could vouch for all of the Trouts. "You knew Jeff was hard-nosed and disciplined, but balanced," Morhardt recalled, "and Debbie the same way. Then, when you see Mike and his hard work and his discipline and his respect for authority. ... Everything you put on that side of the ledger can only be a positive."

That night, after the Angels drafted Randal Grichuk with the 24th pick, Morhardt got a text from his bosses: The Angels were taking Mike Trout. Morhardt stood up, raised his arms over his head and all but shouted, "We got him."

Mike Trout had already won an MVP award and finished runner-up in the voting for two others when he was asked on Father's Day three years ago whether his father regularly offered thoughts and observations about his swing.

After all, nobody is more intimately familiar with the outfielder's hitting mechanics than Jeff Trout, a former All-American who knows about hitting, who was there when Mike Trout took his first swings and began to design his own approach at the plate.

Nah, Mike answered, through his irrepressible grin. His dad never really talked about that.

No postgame texts with a reference to a home run or a strikeout?

Well, Mike said, there are texts before and after every game with his dad and his mom and his girlfriend, Jessica (now his wife). But none of them has to do with baseball.

What are they about? Superstition? Wishes for good luck?