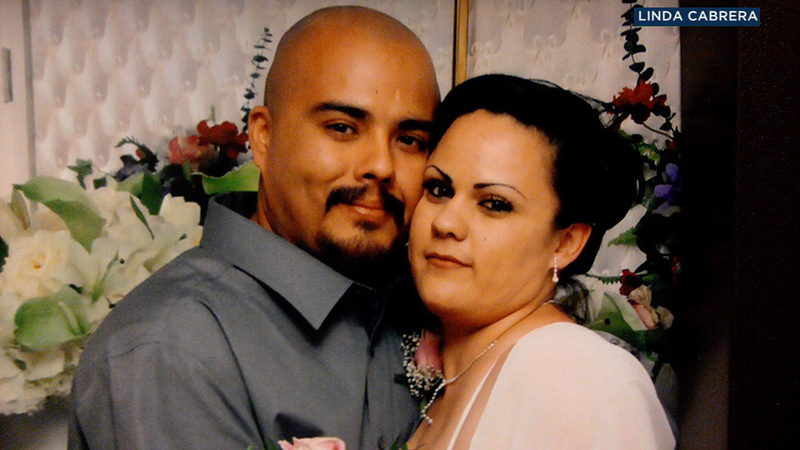 HAWTHORNE, Calif. (KABC) -- The driver of a double fuel tanker that was hit by an out-of-control SUV on the 105 Freeway in Hawthorne on Friday was a beloved father, his family said Sunday.

Leo Cabrera was behind the wheel of the tanker truck at about 5:15 a.m. when a Land Rover swerved in and out of traffic and slammed into his truck near the Crenshaw Boulevard exit.

Two people were killed in a crash involving a tanker truck and an SUV on the 105 Freeway in Hawthorne, authorities said.

The fiery wreck shut down part of the 105 Freeway for more than 14 hours.

Cabrera was married with three young children. His wife Linda said in a statement that she lost her best friend and better half.

"He was a hardworking man, loved his family very much -- always smiling, thinking of others. He had a big heart. He gave me the most beautiful 12 years of marriage and three beautiful babies," she said. "(They're) hurting for their daddy. He came home every morning straight to give us all kisses when we were home sleeping. We miss those."
Report a correction or typo
Related topics:
hawthornelos angeles countytraffic fatalitiesexplosionfireman killedcrash
Copyright © 2021 KABC-TV. All Rights Reserved.
RELATED
2 killed in fiery tanker crash on 105 Freeway in Hawthorne
Stranded travelers ditch cars on 105 Fwy, climb fence to reach LAX
Food truck feeds drivers on 105 amid gridlock traffic after fiery crash
TOP STORIES
1 killed in multi-car pileup on 210 Freeway near Monrovia
Britney Spears asks judge to free her from conservatorship
McAfee antivirus software creator dead in Spanish prison
Man shot, killed by deputies at end of chase in Norwalk
Magnitude 3.6 earthquake rattles Yucca Valley
Car sideshow creates dangerous scene in Fullerton
NYT report: No tuna DNA found in Subway's tuna sandwich
Show More
Road rage attack involving bear spray in Seal Beach results in arrest
Cows stampede through Pico Rivera neighborhood
Mother of two shot, killed after minor traffic accident in Chicago
CHP chase ends in fatal shooting of suspect on 10 Freeway
Golden retriever missing for 2 weeks rescued from NJ bay
More TOP STORIES News