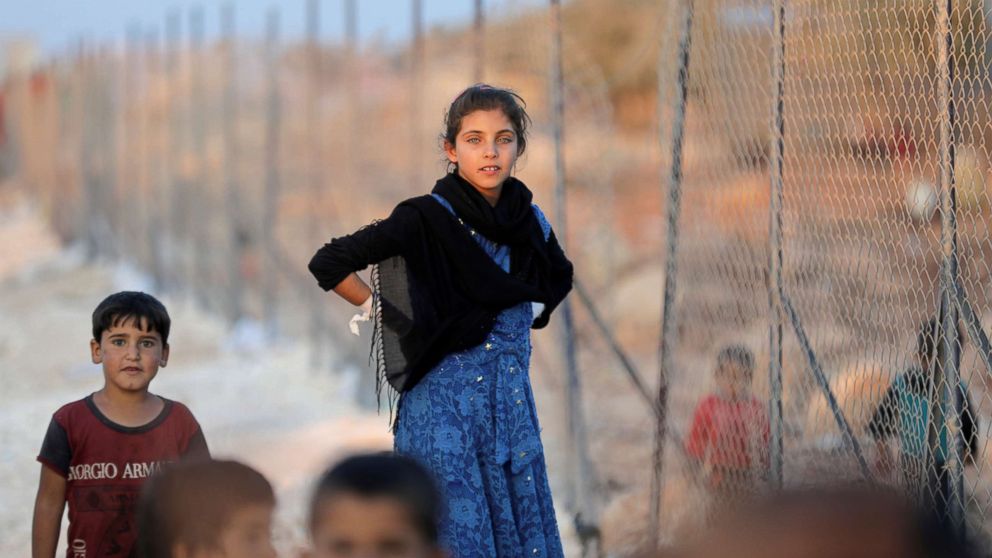 The Trump administration is proposing a cap of 30,000 refugee admissions in the 2019 fiscal year, according to Secretary of State Mike Pompeo, in what would be the lowest cap ever set in the refugee admissions program's 43-year history.

The current lowest cap was last fiscal year's ceiling of 45,000 refugees, but the U.S. is on track to admit less than half that number.

While Pompeo said the U.S. remains the most generous nation to refugees, the proposal was met with swift outrage from refugee resettlement agencies and human rights groups like Church World Service and Refugees International, calling it "appalling," "an affront to American communities," and "a shameful abdication of our humanity in the face of the worst refugee crisis in history."

Worldwide, there are more than 68 million displaced people, including more than 25 million refugees, according to the United Nations.

But as of last Friday and with less than two weeks left in the 2018 fiscal year, the U.S. had admitted 20,825 refugees -- the second lowest number of refugees admitted in the program's 43-year history. Only in 1977 did the U.S. admit fewer refugees, although this is not the first time an administration has come in below its cap.

By comparison, 53,716 refugees were admitted in the 2017 fiscal year, which included nearly four months under President Obama until President Trump was inaugurated on January 20, 2017. Obama had initially set a cap of 110,000 refugees, but once in office, Trump banned refugee admissions for 120 days and then set a new cap of 50,000 refugees.

The administration must now by law consult with Congress before making its final determination on a ceiling before the new fiscal year starts on October 1.

"This year's proposed refugee ceiling must be considered in the context of the many other forms of protection and assistance offered by the United States," Pompeo said in brief prepared remarks on Monday, after which he took no questions. "Some would categorize the refugee ceiling as the sole barometer of America's commitment to vulnerable people around the world. This would be wrong."

In particular, Pompeo framed the new refugee cap alongside the new cap on asylum seekers that the U.S. will process in the 2018 fiscal year -- 280,000 people. There are over 800,000 asylum seekers in the U.S. whose cases have not been adjudicated. Maintaining the administration's stance from last year, Pompeo said the government would be diverting resources from refugee admissions to handle the asylum backlog.

Refugees are vetted and granted entry into the country while abroad, while asylum seekers enter the country first and then request asylum in order to stay. The Trump administration wants to deal with those already here before vetting and admitting new people "in consideration of both U.S. national security interests and the urgent need to restore integrity to our overwhelmed asylum system," said Pompeo.

Pompeo cited other reasons for the lower cap, including that refugees would rather stay closer to their home country than come to America, that the U.S. already provides billions of dollars in assistance to communities overseas, and that it's more important to end the conflicts than accept new refugees.

But critics say the low refugee ceiling damages U.S. relations, as many allied countries like Jordan or Bangladesh are strained by their enormous refugee communities. More than 5 million Syrian refugees live in other countries in the Middle East, such as Lebanon and Turkey, while the U.S. admitted only 60 Syrian refugees in the 2018 fiscal year.

The majority of refugees worldwide come from Syria, Afghanistan and South Sudan. In addition to 60 Syrians, the Trump administration is on track to admit 744 Afghans and 12 South Sudanese this fiscal year.

The Trump administration is being sued by a group of refugee resettlement agencies and individual refugees, who allege that despite an internal security review that found banning refugees was not necessary for national safety, the administration did so anyway, citing security concerns.
Report a correction or typo
Related topics:
abc newsnational
Copyright © 2020 ABC News Internet Ventures.
More Videos
From CNN Newsource affiliates
TOP STORIES