SAN JOSE, Calif. -- Five people have died, including the suspect, after a standoff in San Jose, California, police said. All four of the victims died of gunshot wounds, authorities say.

The stand-off began at 8:40 Sunday night at a home on Habbitts Court off Senter Road after reports of shots fired. Police arriving at the scene said they located several family members who were fleeing the scene.

Officers used an armored tactical vehicle to help rescue a man and woman from the house. The two victims were suffering from at least one gunshot wound each and were transported to the hospital, police say. They were pronounced deceased a short time later, authorities said.

After a standoff, officers entered the house around 1:25 a.m. and found two women and the suspect suffering from at least one gunshot wound each. They were pronounced dead at the scene.

The incident is being investigated as a quadruple murder-suicide, according to authorities. It appears the suspect shot the four victims before committing suicide by shooting himself, police said. There are no outstanding suspects, authorities say.

A neighbor told ABC7 News that the suspect's wife ran inside his home to seek shelter. The neighbor said she jumped the fence between their homes and ran into his home, hiding in his 5-year-old son's bedroom.

RELATED: Here's what we know about the San Jose standoff, deadly shooting

The neighbor said he was hiding with his family in their master bedroom and did not talk to the woman. He then went outside to close all their doors and said he saw the suspect looking for his wife.
The shootings have devastated the community.

"Our hearts go out to the family and the community who just lost family members in this city. This is a horrible act of violence," said San Jose Mayor Sam Liccardo.

Several people living near Habbitts Court have been evacuated; they are staying at a nearby community center. There is still a large police presence in the neighborhood.

Police have not released a motive.

The coroner’s van has arrived on the scene. Police say the people involved in the apparent quadruple murder-suicide are family members. 3 women and 2 men are dead @abc7newsbayarea pic.twitter.com/XJx4r0vtMO

Mario lives on the opposite side of Habbitts Ct. where the quadruple murder-suicide happened in San Jose. He heard the gunshots @abc7newsbayarea pic.twitter.com/QVUeoZxtlF

According to police, 2 people died at the hospital and 3 bodies were found inside the home involved on Habbitts Ct. One of the bodies found in the house is the shooting suspect. @abc7newsbayarea pic.twitter.com/g2OYY3bMwS 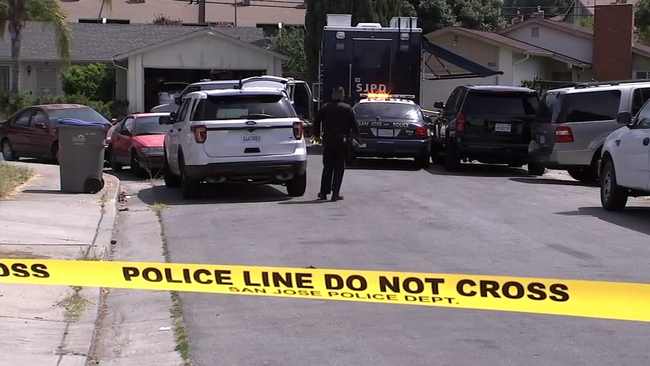