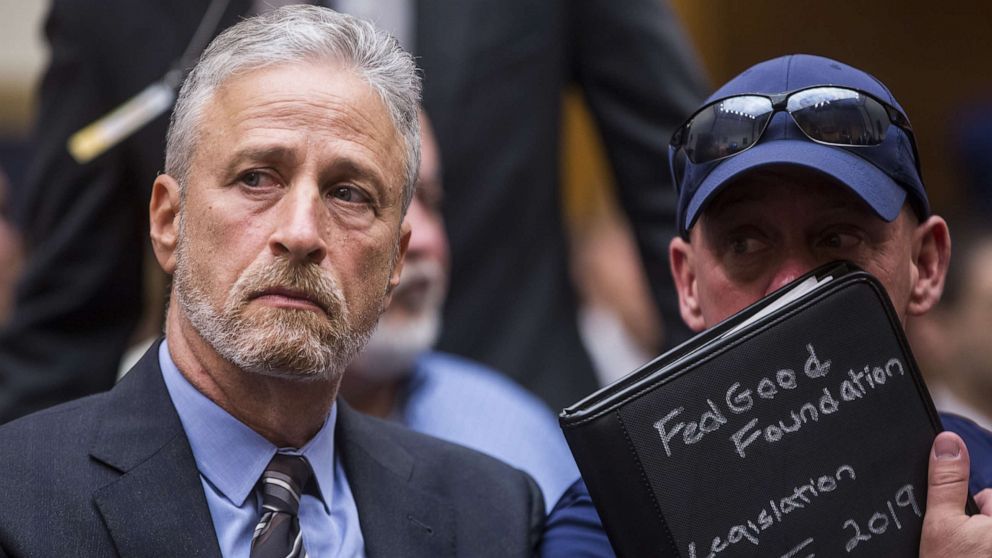 First responders from 9/11 and their advocates, including comedian Jon Stewart, made an emotional appeal to Congress on Tuesday to make a victim compensation fund permanent.

Stewart did not hold back, ripping Congress for failing to fully fund a program to support sick and dying 9/11 first responders and choking back tears.

"They responded in five seconds, they did their jobs. With courage grace, tenacity, humility. Eighteen years later, do yours!" he shouted.

"I'm awfully tired of hearing that it's a 9/11 New York issue. Al-Qaeda didn't shout death to Tribeca. They attacked America and these men and women ... brought our country back," he said.

The September 11th Victim Compensation Fund, which Stewart and others have battled to protect for years, is set to run out of money in December 2020. A new bill, which the House Judiciary Committee is set to vote on Wednesday, would permanently authorize funding for the program.

This report was featured in the Wednesday, June 12, 2019, episode of ABC News' flagship podcast, "Start Here."

Stewart was in the same position four years ago, but the money in the fund has dried up as the number of cancer cases continues to grow. The 2015 compromise only added an additional 5 years of funding.

Stewart was joined not only by 9/11 survivors and first responders, but also the widow of a construction worker who responded at Ground Zero, clutching a photo of her late husband to her chest as she spoke.

But his testimony was the most searing and visceral of the morning, as he accused lawmakers of negligence and of treating first responders lobbying for more relief money "like children trick-or-treating, rather than the heroes they are and they will always be."

"I'm sorry if I sound angry and undiplomatic, but I'm angry, and you should be, too, and they're all angry as well and they have every justification to be that way," he said.

Noting that behind him was a hearing room full of aging first responders who had made another trip to Washington to fight for health care funding, Stewart said, "This hearing should be flipped. These men and women should be up on this stage, Congress should be down here answering their questions as to why this is so damn hard and take so damn long."

The room erupted in applause when he finished his remarks.

"I cried through all of it, most of us did," Rep. Mike Johnson, R-La., told Stewart.

The Louisiana Republican then predicted the bill would sail through the committee and pass nearly-unanimously through the House.

The proposal's fate in the Senate is unclear. The bill was held up by Majority Leader Mitch McConnell, only to be passed as part of last-minute negotiations over the year-end spending deal in 2015.

Stewart is already taking aim at McConnell, promising that advocates won't allow a "certain someone" in the Senate to use the program as a "political football" in spending negotiations.

"Your indifference cost these men and women their most valuable commodity: time," Stewart said at one point.

Stewart was preceded by Luis Alvarez, a retired New York City detective, who will go through his 69th round of chemotherapy due to complications from being at Ground Zero.

"We are not here for anything for ourselves," said Alvarez. "I did not want to be anywhere else but Ground Zero. We showed the world we would never back down and that we can all work together."

Alvarez explained he was there so the victims who come after him are taken care of.

"My life isn't worth more than the next responder to get cancer. This fund is not a ticket to paradise, it's there to provide to our families when we aren't there," he said.

Judiciary Committee Chairman, Rep. Jerry Nadler, D-N.Y., ended the hearing by assuring the room that "we will get this done as quickly as possible, and I do think we will get this done."
Report a correction or typo
Related topics:
abc newsnational
Copyright © 2020 ABC News Internet Ventures.
More Videos
From CNN Newsource affiliates
TOP STORIES