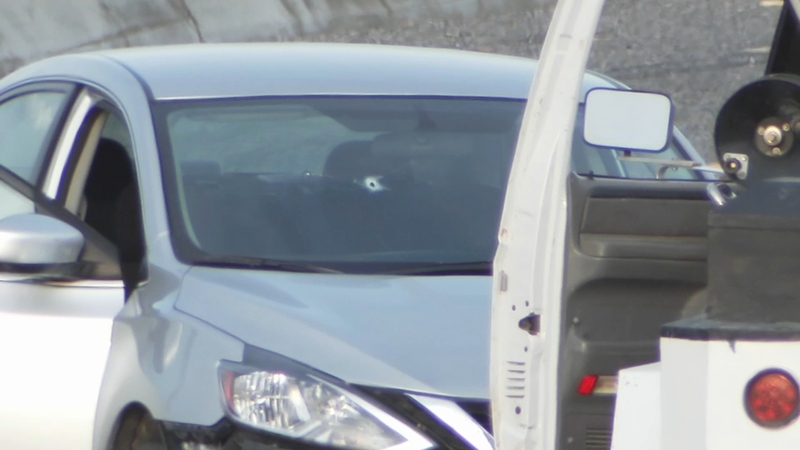 Freeway drivers tried to save victims shot on I-10

HOUSTON -- A gunman is on the run after Houston police say he shot and killed two people with an AR-15 in the middle of rush hour on I-10 near John Ralston.

Just before 6 p.m. Thursday, investigators said a car hit another vehicle, causing it to spin out. The shooter and another person got out of the sedan that caused the crash. One of them quickly got the attention of witnesses in the area.

"A Hispanic male, holding a really big gun, shooting at another car," reported a police dispatcher.

HPD investigators are on the scene of a fatal shooting that occurred at 5:55 pm at IH10 East Freeway at Federal Road where 2 people have been shot and are deceased. The freeway will be closed for investigation. Avoid the area and use alternate routes. A PIO is en route. #hounews

"One of the witnesses saw the weapon," Houston Police Department Assistant Chief Bobby Dobbins said. "He's familiar with guns and he believes it was an AR-15."

Police say as the victims' car rolled toward the gunman, he fired multiple rounds. Both men inside were killed.

According to HPD, the victims were 25 and 33 years old. Police have not released their identities yet.

Video shows bystanders rushing to help the victims, performing CPR on the freeway, but the men couldn't be saved.

A gunman is on the run after Houston police say he shot and killed two people with an AR-15 in the middle of rush hour on I-10 near John Ralston.

According to police sources, a large trash bag with marijuana was in their car. Investigators are looking at all possible motives.

HPD said a motive is unclear in the shooting, and they do not have a good description of the shooter or his vehicle.

The suspects took off, leaving behind a crime scene on the freeway.

Friday morning, police released a description of the shooter saying he is a Hispanic man in his early 20s. He's about 5'7" with a thin build, and he wore a red shirt.

The vehicle he took off in is described as a newer model, dark-colored, 4-door sedan with unknown license plates.

UPDATE: The shooter is described only as a Hispanic male in his 20s, about 5'7". He was wearing a red shirt and fled the scene in a newer model, dark colored 4-door sedan. Information on the incident is at -->https://t.co/isfebKsiE2 #hounews

Investigators are urging anyone who may have seen or heard anything to call HPD Homicide at 713-308-3600.

You can also give anonymous tips by calling Crime Stoppers at 713-222-TIPS. A reward of up to $5,000 may be offered for information leading to an arrest or charges.

"This is a scary event to happen at 6 o'clock at night on a busy freeway," Dobbins said.