3 killed in crash on 60 Freeway in Jurupa Valley; freeway back open 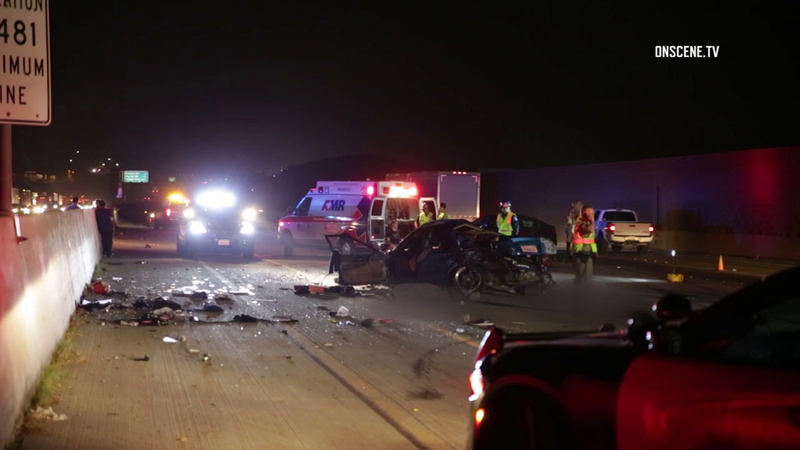 JURUPA VALLEY, Calif. (KABC) -- Three people were killed in a crash on the 60 Freeway in Jurupa Valley early Saturday morning, prompting several lanes to be shut down in both directions.

The crash occurred on the eastbound 60 Freeway shortly after 3:30 a.m., according to the California Highway Patrol.

The incident started when a driver with two passengers crashed his 1995 Honda Accord into a center divider near Country Village Road for reasons not yet known, officials said.

The Honda became disabled with none of its lights on and blocked multiple lanes. That is when a 2016 Ford Fusion traveling eastbound crashed into the Honda.

A man in his 20s from the first vehicle was thrown over the center divider onto the westbound lanes of the 60 Freeway, where he was run over by multiple vehicles, CHP officials said.

The two other occupants of the Honda, a man and a woman, were also struck in the wreck and pronounced dead at the scene.

The victims' identities were not released pending notification of family.

The driver of the Ford, identified as 27-year-old Victor M. Tyler, of Redlands, sustained minor injuries to his arms.

All westbound lanes of the 60 Freeway were temporarily closed near Pedley Road, and only one lane was open on the eastbound side while hazmat officials cleaned up the scene.

All lanes were later reopened.