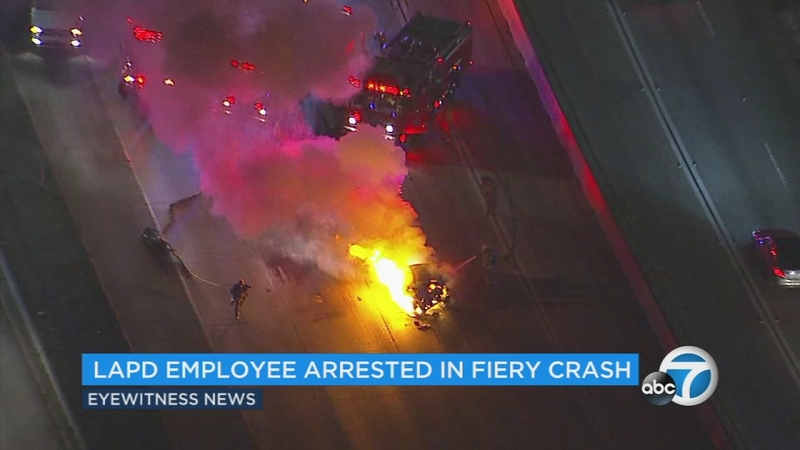 WHITTIER, Calif. (KABC) -- A 26-year-old Los Angeles Police Department officer has been arrested for his involvement in a fiery crash on the 605 Freeway in Whittier that left three people dead, the LAPD confirmed Wednesday.

Edgar Omar Verduzco, of Santa Ana, who suffered a broken nose in the off-duty collision, was being held on $100,000 bail, authorities said.

"It appears (that) alcohol was a factor in this traffic collision with official results pending," the California Highway Patrol said in a statement.

In an interview with ABC7, LAPD Chief Charlie Beck said he was "heartbroken" over the victims' deaths.

"I'm more than a little bit angry that it's one of my employees that was involved," Beck said, describing Verduzco as a military veteran who joined the LAPD two years ago.

Noting that the CHP investigation was still in its early stages, Beck said: "On the face of it, it appears he was driving under the influence and ran into another vehicle. If that is the case, he will face the most severe discipline that I have available."

The incident happened about 10:19 p.m. Tuesday on the southbound 605 near the Washington Boulevard exit, according to CHP.
EMBED More News Videos

Los Angeles Police Department Chief Charlie Beck commented on the arrest of an LAPD officer after a fatal DUI crash on the 605 Freeway in Whittier.

Authorities said Verduzco was traveling in a 2016 Chevrolet on the southbound 605 in the HOV lane at a high rate of speed when he rear-ended two cars -- a 2014 Nissan and a 2010 Scion.

This impact caused the Nissan to become fully engulfed in flames with three occupants trapped inside. All three were pronounced dead at the scene.
The names of the deceased were not immediately released.

A 31-year-old woman, who was driving a 2010 Scion, suffered minor injuries in the crash.

The wreck shut down all southbound lanes of the 605 for hours. All lanes have since reopened.

The official cause of the collision remains under investigation. If you have any relevant information, you're urged to contact Officer A. Perez at (562) 868-0503.
EMBED More News Videos

Three people were killed Tuesday in a multi-car crash that caused one vehicle to burst into flames and shut down the southbound 605 Freeway in Whittier overnight.