MLB players on how they've had to adapt, from no fans in the stands to no couches in the clubhouse 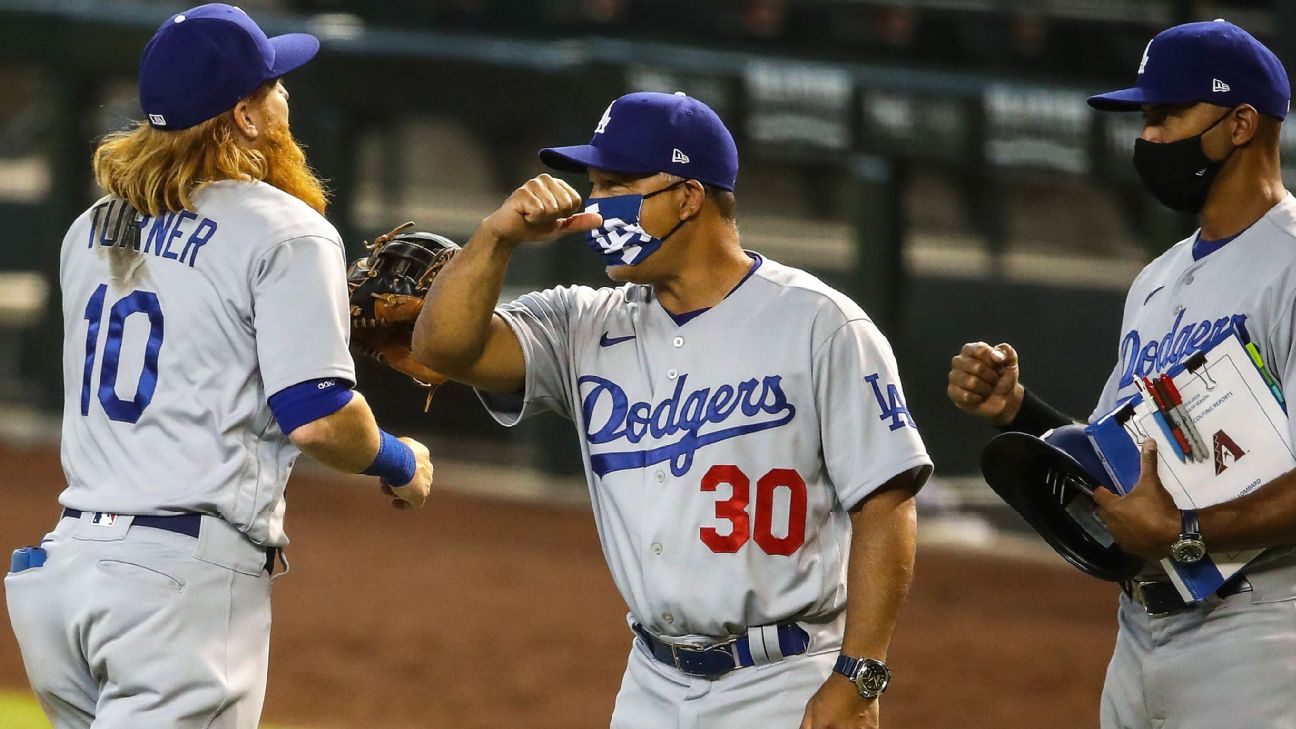 Los Angeles Dodgers hitting coach Brant Brown used to see his daily drive to the ballpark as an opportunity to make phone calls. But this season he has learned, as many of the team's players and coaches have, that it's best to stay quiet on his commute to save up enough saliva for the diagnostic/PCR test that usually awaits him.

Brown's adjustment is a shell on a sandy beach, just one example of the countless alterations made by players, coaches, trainers and everybody else involved with making Major League Baseball games possible in a time when the coronavirus pandemic continues to devastate the country.


Life has been predictably different for the 3,500-plus players, coaches and staff members who are classified as Tier 1 or 2 personnel on the 30 MLB teams during the first two weeks of this atypical 2020 season. That is especially the case for players, who have quickly modified so many of the aspects of playing a game that has encompassed most of their lives. The protocols are a nuisance but necessary, as further evidenced by recent outbreaks on the Miami Marlins andSt. Louis Cardinals that forced numerous postponements and schedule adjustments.

Below is a look at some of the waysthe COVID-19 pandemichas changed everything.

To allow for "enhanced physical distancing," baseball's operations manual stipulates that only players with a decent chance of entering the day's game should sit in the dugout. The rest are free to roam -- with restrictions on the use of electronic devices -- and many are still adjusting.

Dodgers pitchers Clayton Kershaw, Alex Wood, Ross Stripling and Julio Urias basically didn't know what to do with themselves on Opening Day at Dodger Stadium. They started in the left-field seats above the bullpen, moved to the weight room, then made their way back outside, sitting in the new seats just beyond the outfield fence. Stripling had the idea of sitting in the famous Crawford boxes when the team played at Minute Maid Park in Houston, but those seats were already taken -- by cardboard cutouts.

Chicago Cubs starter Jon Lester was able to take in a game from Wrigley Field's bleacher seats in left field, devoid of real or fake fans.

"It was awesome to watch a game there," Lester said. "I'm glad I did it. Then we walked around the stadium to get some different views. It's kind of boring not being allowed in the dugout or clubhouse during games. You have to find stuff to do."

A trip to Houston would typically mean that Stripling stays at his own place, sees his grandmother and catches up with friends.

This time, he couldn't do any of that.

"That's certainly weird," Stripling said. "Normally, you would have this circled on your calendar months ahead, getting tickets for your buddies and all that stuff."

Stripling could have stayed at his house, but he said he "didn't want to be the guy who went about town and messed everything up." The Dodgers were in Houston for only two days, so Stripling told everybody there that he would see them in three months. Dodgers manager Dave Roberts stayed at his place in San Diego when the team played there earlier this week, but he made it a point to keep his distance from his wife and kids.

"I can see them, but no touching," Roberts said. "I'm sort of back to quarantine in my own house. I've got three dogs that I can still kind of hug on, but that's about it."

Life on the road


To ensure social distancing, the Dodgers used four buses to take their traveling party to the airport for the team's first road trip. Some players wore gloves on the airplane, and all of them were told to avoid touching the remote controls and telephones in their hotel rooms. Fortnite, Call of Duty and Madden absorbed most of their downtime.

The Los Angeles Angels had their first night off on the road on July 25 in Oakland. The players and coaches ordered food and staged a casual, socially distant gathering. Angels manager Joe Maddon said it was "pretty cool, actually." The experience prompted Maddon to speak with the team's traveling secretary, Tom Taylor, about booking two additional large rooms -- one for the players, one for the coaches -- so they could gather in groups to wind down after road games.

"Maybe that will satiate their desires to go elsewhere," Maddon said.

Hanging out in the clubhouse

Ideally, players would be dressed in full uniform before their arrival at the ballpark, but MLB understood the unlikelihood of that from the onset. The key is to maximize the amount of time players spend outdoors, which has prompted teams to make their clubhouses as unwelcoming as possible. Angels starter Dylan Bundy arrived at the visiting clubhouse on July 24 in Oakland and realized that all the couches were gone.

"It's the bare necessities in there," he said. "It's your clothes and locker, and that's about it."

With Wood on the injured list and Kershaw not quite ready to return, the Dodgers had an open spot in their rotation for their July 31 game and needed to utilize someone from their satellite camp at USC. The team was on the road but, luckily, in Phoenix, which meant that Tony Gonsolin was a six-hour car ride from his 2020 debut.

MLB doesn't forbid commercial travel for players under these circumstances, but it does discourage it. The Dodgers have decided not to put those players and their family members at additional risk if a sudden need arises while the team is on a road trip. If driving isn't an option, the Dodgers have decided that they will make do with the players on their taxi squad.

The first afternoon of the regular season provided a stark reminder of how different everything was.


"We had a hitters' meeting that went a little longer than 15 minutes," Dodgers third baseman Justin Turner said, "so in the middle of it, the room had to disperse and leave the room for a couple minutes and come back in to make sure we were in line with the procedures and protocols for contact tracing. So that was a little weird."

The Dodgers' coaches began the season by staggering their pregame prep work in segments, divided between starters and relievers in hopes of avoiding similar interruptions. Players don't have access to the team's computers, which means pitchers rely on coaches and front-office executives to send them the information they need to prepare for games. Alex Wood usually has a detailed plan for how he'll scout his opponent the day of his starts, but he will have to deviate from that.

"It's probably going to make it so that I have to prepare more the day before in terms of who I'm facing that next day, so there's a little bit less to do and less to worry about the day of because you don't know how much time you'll have or what you'll have access to," Wood said.

Relievers, particularly closers, thrive off the roar of the crowd. Fans help them find the extra adrenaline they need to pitch the ninth inning of tight games. Now, those men are faced with the task of manufacturing that push.

That isn't an option for Dodgers closer Kenley Jansen.

"If I drink Red Bull," Jansen said, "call the doctors for them to shock my heart again because I'm telling you -- 100 percent sure -- I'm gonna go back to AFib."

Jansen has undergone two procedures in the past eight years to address atrial fibrillation, a condition that causes his heart to beat out of rhythm. Jansen avoids caffeine, even in situations when most people might benefit from an extra boost. Instead, he is continually learning how to internalize his focus and control his breathing, a skill that is especially crucial this season.

"It's hard, man. I'm not gonna lie about that," Jansen said of finding an edge in empty ballparks. "It's so much easier to pitch with fans in the stands."

No more "around the horn"

Much has been made about players' not being allowed to spit or high-five, a lifelong habit that many have been unable to shake. But here's another one, straight from baseball's operations manual: "After an out, players are strongly discouraged from throwing the baseball around the infield."

This one slipped past Kershaw. He made his 2020 debut against the Arizona Diamondbacks on Aug. 2 and struck out the first batter he faced, Ketel Marte, then began to roam around the mound as he normally would, waiting for the ball to be thrown around the infield. His catcher, Austin Barnes, waited to get Kershaw's attention and instead threw the ball right back to him.

"There's definitely some things to get used to," Kershaw said. "Just to start the day, too. You eat your food at the hotel, and you gotta take the bus. I like to get here early on start days, and I wasn't able to do that. So many different things. But at the end of the day, everybody's dealing with it. And we still get to play baseball, so I'm thankful for that." 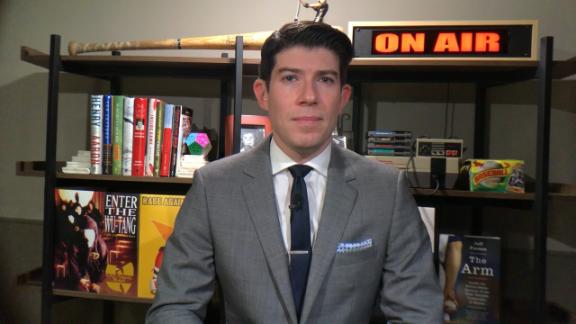 Passan implores MLB to build a playoff bubble
Jeff Passan acknowledges that it would be tough to build a bubble on the fly right now, but he believes an October playoff bubble is a realistic option for MLB.
Report a correction or typo
Related topics:
sportsespnmlbdailylos angeles dodgers
Copyright © 2021 ESPN Internet Ventures. All rights reserved.
More Videos
From CNN Newsource affiliates
TOP STORIES