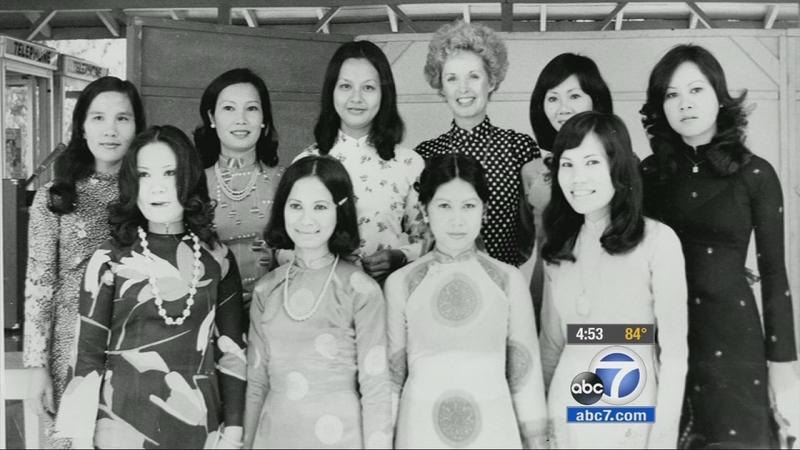 GARDEN GROVE, Calif. (KABC) -- Get a manicure in California and chances are the person pushing back your cuticles is of Vietnamese heritage.

How so many came to choose the trade goes back 40 years and involves a Hollywood actress: Tippi Hedren.

While helping at a refugee camp set up near Sacramento after the fall of Saigon in 1975, Hedren noticed the Vietnamese women admiring her nails.

"They loved my fingernails. They were fascinated with my fingernails," said Hedren, who starred in several Alfred Hitchcock movies in the 1960's.

Hedren saw it as a chance for the new immigrants to get a job. She invited her Sherman Oaks manicurist, Dusty, to teach a class of about 20 women at the refugee camp.

Hedren insisted the students learn what was then an advanced technique called silk nail wrapping -- creating artificial fingernails made from pieces of silk material.

"I was so proud. Every one of them passed the cosmetic license test in English, then off they went," Hedren said.

"I like to call her the godmother of the Vietnamese nail industry, because that's what she is," said Tam Nguyen, president of Advance Beauty College in Garden Grove.

From that class grew an industry that today draws in several billion dollars a year.

According to the industry magazine, Nails, 80 percent of licensed manicurists in California are Vietnamese.

"Forty years ago this week was the most traumatic time in our family's history," recalls the 41-year-old doctor. "My parents came over with nothing but the shirts on their back."

His father, Minh, now 84, was a high-ranking South Vietnamese Navy official when he was forced to flee Vietnam with his unit. He ended up at a re-settlement camp at Camp Pendleton.

Nguyen says he and his mother, Kien, pregnant with his sister, Linh, escaped Vietnam two days before April 30, 1975 and were sent to Arkansas.

The family was reunited three months later in Santa Cruz.

His parents were friends with one of Hedren's students, Thuan Le, who encouraged Nguyen's mother to get her beauty license.

The demand for affordable manicures was clear.

"After a year, my dad clearly saw that my mom economically was definitely the breadwinner," Nguyen said.

His father also got his nail license. His parents eventually owned their own salons.

In 1987, they started a beauty college in Orange County.

Nguyen, who finished medical school, decided he wanted to continue his family business. In 1999, he and his sister started Advance Beauty College in Garden Grove after his parents retired. It's considered the largest manicuring program in the U.S., graduating about 40,000 students over the years.

"For her to leverage her Hollywood star power to give back to the Vietnamese, what a great heart," Nguyen said.

Hedren calls it an honor to be part of it all.