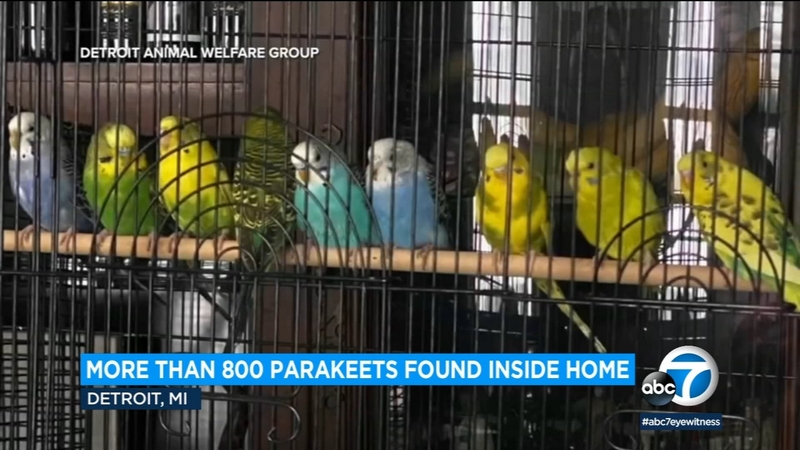 A man alerted authorities when he found the birds inside one room of his father's house in Detroit. Investigators say the father had mental issues.

The birds were all alive, but in clear distress. Many of them found crammed in boxes.

"And they were all on top of each other and suffocating and very stressed. They weren't even moving when they arrived. I thought they were all dead because not one of them was moving," described Kelley LaBonty, director of the Detroit Animal Welfare Group.

LaBonty told the Detroit Free Press that the man had called to say he was coming to surrender 60 to 80 parakeets from his father's house. But he showed up Thursday with 497 parakeets in his truck. Later in the day, hundreds more were surrendered, making the grand total 836 parakeets.

The parakeets were separated and were being checked out by a number of veterinarians.

The Detroit Animal Welfare Group said on its Facebook page that the birds will be available for adoption through the four organizations currently housing them once they are evaluated by a veterinarian and deemed healthy.

The shelter added that it is accepting applications for the birds on its website.

"These birds came from a very unhealthy situation and the irresponsibility of the owner is infuriating," shelter officials wrote on Facebook. "However, it truly takes a village to help these animals and we are so thankful for everyone that works together to get them the care and proper homes they deserve."

A family's beloved pet dog named Zuko jumped overboard when no one was looking and got lost at sea.