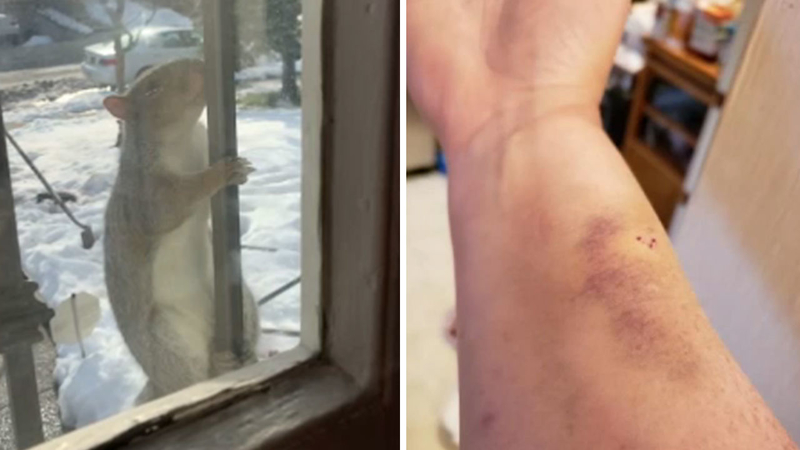 Most of the attacks have happened on 65th Drive near Fitchett Street in the Rego Park neighborhood.

Queens residents have reported at least five attacks from aggressive squirrels since late November. Attached is video of a squirrel trying to attack a family.

One woman needed to visit the emergency room after her hand was bitten by a squirrel. Others have said they are afraid to walk in their own neighborhood due to the critters.

Micheline Frederick said she was attacked on Dec. 21.

"It just basically runs up my leg and I'm like OK squirrel, hello, what are you doing," Frederick said. "He either bit or scratched me on my neck and then I must have reached over, and the next thing I know, it's an MMA cage match and I'm losing."

Gerald, the aggressive turkey that forced the closure of Oakland's Morcom Rose Garden, has been captured and released into the wild near Orinda. (Video: Wildlife Emergency Services)

Her hands were covered with blood and bruises. She got a rabies shot as a precaution before warning her neighbor, Licia Wang.

Wang says she was also attacked by a squirrel.

At least three other people have said they had similar encounters with either a single rogue squirrel or a pack.

The residents have reached out to the city for help, but were told to hire their own licensed trapper, which they did, but so far have not seen results.

On Monday, a bear did something you rarely hear about: It attacked a 19-year old woman who had fallen asleep in her backyard.

"Worried for the children, that's what most people are scared with the kids," Frederick said.

Some experts say the reason the squirrels might be approaching the humans is because people have been feeding them.

However, those who spoke with WABC-TV said they have not been feeding the animals or chasing them -- they have simply been minding their own business.

"When we leave the house, we have to carry mom's homemade pepper spray to make sure if it comes at us, we spray it," witness Anika Singh Sood said.

The NYC Department of Health released the following statement:
"The NYC Health Department received a complaint about an aggressive squirrel in Rego Park and advised the property owner to hire an New York State licensed trapper. Squirrels and many other small rodents are rarely found to be infected with rabies. If New Yorkers believe they have observed an animal infected with rabies, they should report it to 311."
Report a correction or typo
Related topics:
pets & animalsnew york citysquirrelanimalanimal attacku.s. & world
Copyright © 2021 KABC-TV. All Rights Reserved.
TOP STORIES
Jeffrey Fire: Crews battle blaze in Chatsworth
FDA backs Pfizer COVID-19 boosters for seniors, high-risk
Carson: Overturned big rig lands on car, covers it with sawdust
Video: Tourist taken to hospital after melee on Hollywood Walk of Fame
Scott Peterson to be re-sentenced to life this fall, judge says
Car fire may be to blame for San Bernardino fire near 215 Fwy
Melvin Van Peebles, godfather of Black cinema, dies at 89
Show More
Laura Lasorda talks to ABC7 on Tommy Lasorda Day in Fullerton
Search resumes for Brian Laundrie in Gabby Petito case
Search continues for homeless man who slammed into LA pedestrian
Hollywood Burbank Airport shut down after person runs onto runway
Heat advisories issued for most of SoCal on first day of fall
More TOP STORIES News