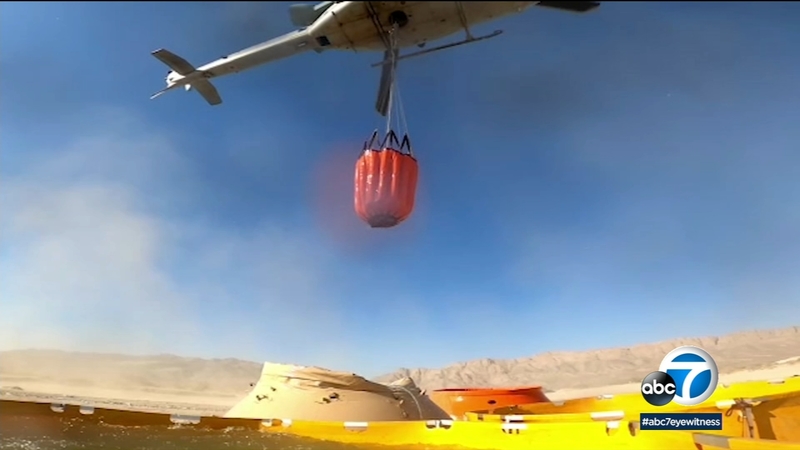 Drought leading to extreme solutions to save wildlife

Borrego Springs, CA (KABC) -- Peninsular Bighorn Sheep were listed as an endangered species in 1998 due to habitat loss and human disturbance, but this year, it might be human intervention that keeps them from dying of dehydration.

"We have documented cases where the only available water source has gone dry, and we've found just direct mortality, dead bighorn sheep in those areas," said Jeff Villepique, a Senior Wildlife Biologist with the California Department of Fish and Wildlife.

Scientists in the Anza Borrego Desert State Park believe even the loss of a few sheep because of extremes drought conditions could be tragic for the recovery of the peninsular herd. With that in mind, several volunteer groups, multiple state agencies and the U.S. Marine Corps are working together to transport millions of gallons of water directly to all desert wildlife, in this case, deep into the park by helicopter.

"It is kind of vast and untrodden and hard to get out there. So helicopter really helps us with the operation," according to Dan McCamish, a senior environmental scientist with California State Parks, Colorado Desert District.

"That area does not have any nearby alternatives. So the concern is that animals would die without this effort," Villepique said.

"In the 30-year lifespan of this guzzler, we've never had to or nobody has ever had to haul water via helicopter before," said Scott Gibson of the Society for the Conservation of Bighorn Sheep.

It's a fact that shows how unique these times are.

Anza Borrego has a series of "guzzlers" built in the 70s and 80s to supplement or replace lost water sources. The goal of the drinker systems is to catch rain, providing the isolated desert wildlife with water, but extreme drought conditions created a desperate need for something different. It's expensive and dangerous for the pilots, and for the volunteers who hiked through the night to reach the guzzlers.

"I think we've watered over 20 guzzlers by truck and pump method thus far, and we've also, with CalFire, hauled water in the clipper mountain range a few weeks ago," said Gibson.

McCamish adds, "We would prefer that the natural ecosystem provide for the system itself. But in instances like this, especially with a federally endangered species, we're trying to take a little more care and making sure those population numbers don't drop below a critical level."