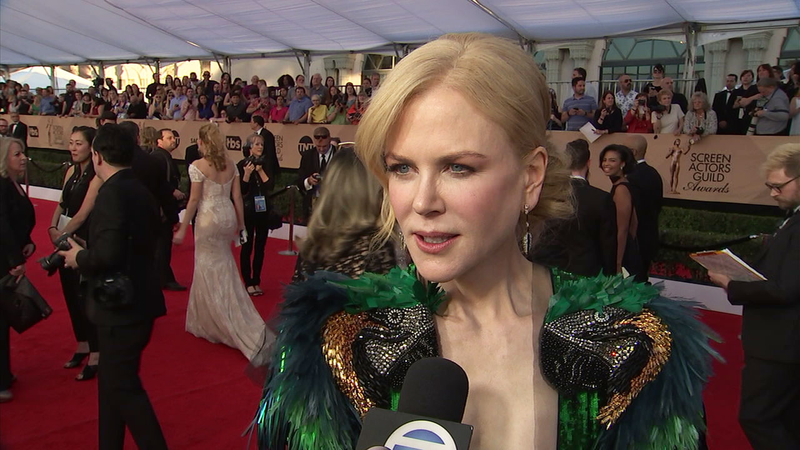 Nicole Kidman on how Oscars nominee 'Lion' has roared

LOS ANGELES -- Many stars are doing their best to support their films by attending events and awards shows, trying to keep up the interest for their movies.

The terrific word-of-mouth has helped "Lion" roar, as the film is now up for six Oscars. Among them are best picture and supporting nominations for stars Dev Patel and Nicole Kidman.

"That's the beauty of these, of awards, because when a small film like this gets recognized and we don't have the advertising budget and a huge ability to get it out there, it's word-of-mouth," she shared.

The buzz just keeps building, thanks to moviegoers and critics who give it a big thumbs up.

"And that's how the film is being discovered, and I'm just so, so happy that it was made and now it's being seen," she added. "The emotional response is what's just astonishing."

"Lion" tells the true story of a boy in India who accidentally winds up in a train that takes him far from home.

He's lost and doesn't know how to get back but he survives on the streets, eventually adopted by a loving Australian couple -- that's where Kidman comes in.

At the Screen Actors Guild Awards, Kidman's husband, Keith Urban, shared why he is so moved by this movie.

"The power of love. It's really...somebody said the DNA of love transcending everything and really being about love," he said.

"Best Oscar memory? Oh my gosh, when I won! I was like, 'Come on, this is like the best of the best!' But I was in a bit of a haze for it," she said. "It didn't settle in, like that I'd actually won it, for about six months, I think."
Related topics:
arts & entertainmentaward showsoscarsacademy awardsactorhollywood wrap
Copyright © 2022 KABC Television, LLC. All rights reserved.
OSCARS
Oscars will have a host this year
Marilyn Bergman, Oscar-winning composer, dies at age 93
Oscar-winning composer Buffy Sainte-Marie still making art at 80
Boyle Heights takes spotlight at Academy Museum
TOP STORIES
Suspect charged with murder of Brianna Kupfer, LA County DA announces
3 Canadians shot, 1 fatally, at ​resort near Mexico's Playa del Carmen
Laundrie claimed responsibility for Petito's death in notebook: FBI
Kobe Bryant's widow discloses witness list for trial over crash photos
Boy, 14, dies after being shot in head in Pasadena; suspect arrested
Louie Anderson, Emmy-winning comedian, dies at 68
Conjoined twins separated after 10-hour surgery
Show More
Kamala Harris to discuss wildfire recovery efforts during SoCal visit
3 men accused of attacking father and son outside of Toluca Lake pub
High wind warning issued for parts of SoCal as strong winds move in
Lawsuit accuses Mater Dei athletics coach of raping student in 1980s
Proposal could make rooftop solar panels in CA more expensive
More TOP STORIES News