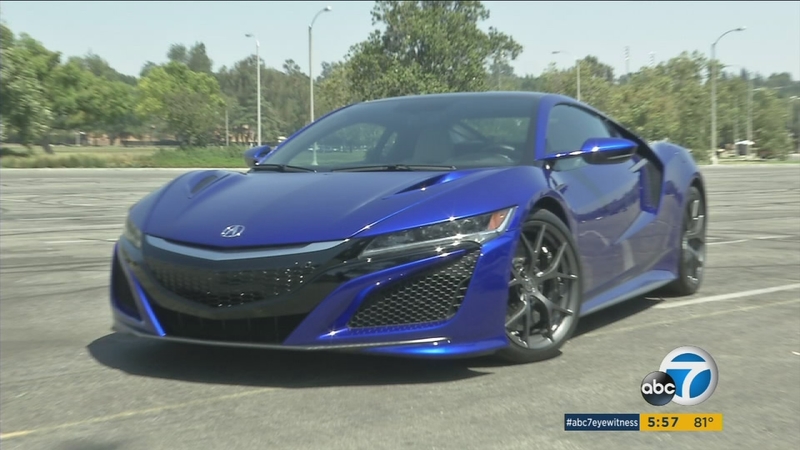 TORRANCE, Calif. (KABC) -- So far, it's only happened once every 25 years or so: Acura wows the car world with a new exotic super sports car, the NSX.

The first time was back in 1990, introduced as a 1991 model. Honda's upscale brand showed that a mid-engine supercar could be as reliable and easy to live with as anything else the company makes. Prior to that, exotics from places like Italy were known to be a bit troublesome to own.

Now, there's a new NSX for a new era. It's still mid-engined, but this time with turbocharging and hybrid power.

One gasoline V6 and three electric motors (one with the engine, and two more at the front) send 573 total horsepower to the ground via all-wheel drive. Add in lightweight construction, and performance is as staggering as you'd expect.

Tests by car magazines have shown 0-60 mph time of around 3 seconds.

But perhaps unexpectedly, this flagship machine was designed at Acura's studio in Torrance. The design center opened on Honda's main campus less than 10 years ago, with the idea that Acura's designers here could vie for big projects like the second-generation NSX.

"We've been here long enough in Southern California that we have a rapport with (the home office in) Japan, and an understanding that they trust us," said Dave Marek, Acura's executive creative director.

Both Marek and lead NSX exterior designer Michelle Christensen are alumni of Pasadena's Art Center College of Design, which furthers the connection of this new supercar to Southern California.

And when the call went out to reinvent Acura's most legendary car, the team from California got the assignment.

"We've matured and grown up, just like anybody," Marek said, speaking of the design team at the still relatively-new Torrance studio. "Once the bird was ready to fly, we flew well enough to get this."

There were certain guidelines for the new car to link its heritage with the original from 1991. The large windshield, for example, and the black roof that contrasts with the lower body. Also, the rear treatment and taillights are a visual tribute to the original NSX.

This car has been anticipated for quite some time and, like the first model, is being sold worldwide. Buyers have put down deposits on the made-to-order supercar, and are now waiting for them to be built.

And many might be surprised to learn that the cars are not being built in Japan, but in Marysville, Ohio, at Acura's new Performance Manufacturing Center. The center is near Honda's huge research and development facility, and each NSX is constructed by a combination of advanced robotic machines and skilled craftspeople

"And I think because of that you get this 'specialness' to it," Marek said. "Hand-crafted, but also the pride that goes into it."