Mystery: Hundreds of dead fish are floating on this lake in Agoura Hills. Here are some theories behind why 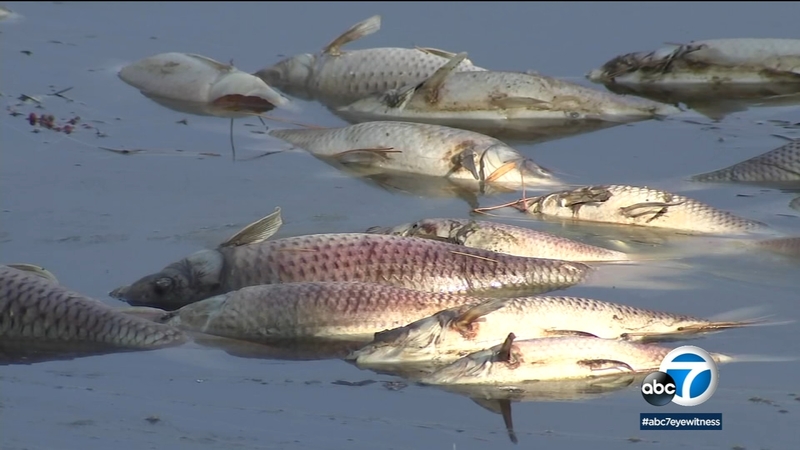 Why are hundreds of dead fish floating on this local lake?

AGOURA HILLS, LOS ANGELES (KABC) -- A smelly problem is plaguing a neighborhood in Agoura Hills. Hundreds of dead fish are floating in Lake Lindero, but why?

Steve Reck has lived in the neighborhood for nearly 30 years.

"It's horrendous. The neighbors are up in arms. My friend's wife is in tears. She spent all this money for her house and she can't enjoy it. She can't open her windows," he said.

Area residents say it's frustrating living with this, and they're wondering why all of these dead fish are now floating around their lake.

Unsuspecting campers happened upon a 9-foot alligator trotting across the road with its next meal, a large fish.

The homeowners association has hired a company to test the water to find out why the fish are dying off. An educated guess from the HOA board - an algae outbreak or the devices that create oxygen for the fish are not working or both.

Thursday, one of the board members was out scooping up some of the dead fish, waiting to hear back from the company that's testing the water. He said the state's fish and wildlife officials offered their theory.

"Probably soot coming from fires, but it goes upstream because they're having lots of reports of the ash that suffocates the fish, but all this is yet to be determined at this point," said Hal Siegel.

So while they wait for the test results to determine what exactly is killing the fish, the quick fix for next few days is to just scoop them up and hopefully help ease the smell.

MUST-SEE VIDEO: This alligator in Fulshear was caught on camera stealing a little girl's fish. You won't regret watching this.