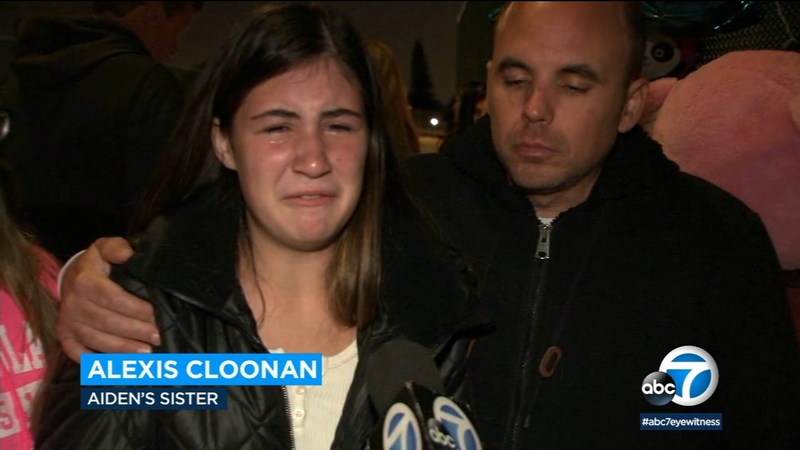 ORANGE, Calif. (KABC) -- The family of Aiden Leos, the 6-year-old Orange County boy killed in a road-rage shooting, visited the roadside memorial Saturday night and expressed their thanks for the outpouring of support from the community.

Aiden was killed Friday morning as his mother was driving him to school on the 55 Freeway in Orange. Someone shot at the car from a newer model white sedan, possibly a Volkswagen, and struck Aiden. He died at the hospital.

A memorial has been growing at a bridge overlooking the site of the shooting, where people have left balloons, flowers, stuffed animals and expressions of sympathy for Aiden's family.

Aiden's sister and uncle were visiting the site Saturday night and spoke to Eyewitness News.

They looked over the many messages and said they were grateful for the support.

"Aidan would be so happy to see that this many people are supporting him and that his life did not go to waste, that it's being honored and remembered," said Aiden's sister, Alexis Cloonan. "Thank you so much."

Added Aiden's uncle, John Cloonan: "I'm blown away. This world is a dark, nasty place. But today it's been nothing but a shining light and a community coming together. And I'm grateful and blessed and so thankful for everyone that's reached out."

Two GoFundMe pages have been started to help Aiden's mother and father.