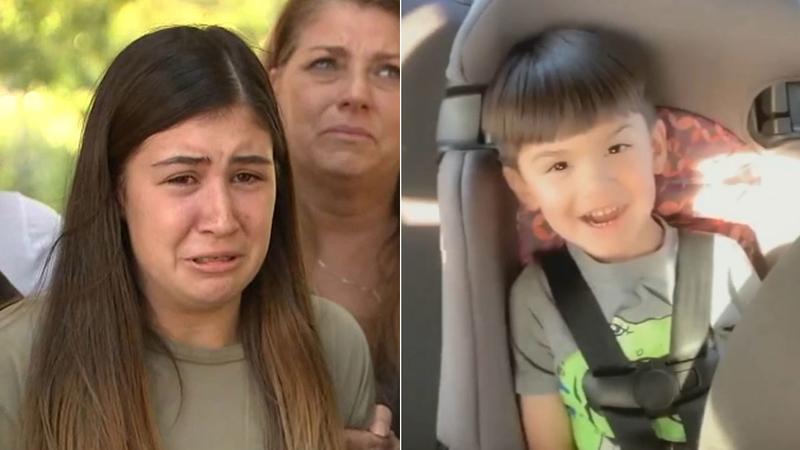 IRVINE, Calif. (KABC) -- After a 6-year-old boy was fatally shot in an apparent road-rage attack in Orange Friday morning, the child's sister spoke out about the heartbreaking loss.

"There was road rage on the freeway and someone pulled out a gun and shot my little brother in the stomach, and he said, 'Mommy, my tummy hurts,'" said Alexis Cloonan, the boy's sister.

"So she went and she picked him up and he was bleeding on her, she had blood on her clothes," Cloonan said. "And then he started turning blue, and that's when the ambulance took him. And that's the last time my mom saw him alive."

Cloonan issued a plea for anyone with information about the shooting to come forward.

The boy was identified by family as Aiden Leos, a kindergartener at Calvary Chapel Yorba Linda. He was being driven to school by his mother when the shooting happened.

The victim's family held a press conference in Irvine just hours after the fatal shooting.

A GoFundMe page was established for Aiden's mother and to help with her child's burial costs.

"My sister has been through a lot. She's a single mom. And you took her son away. You took her boy away," said John Cloonan, Aiden's uncle. "This boy was full of love and joy and laughter."

Authorities say the 6-year-old boy was seated in the backseat of his mother's car on the 55 Freeway when he was shot to death by the suspect in another car in a road-rage attack.

A California Highway Patrol spokesperson confirmed the boy's death at a news conference.

At the time of the shooting, the victim was sitting in the back seat of a silver Chevrolet sedan as his mother was driving northbound on the 55, said CHP Officer Florentino Olivera.

A 6-year-old boy died at a hospital after being shot on the 55 Freeway in Orange. The incident was described by CHP as an isolated road-rage confrontation.

The shooter, who remained at large, was said to be driving a newer model white sedan, possibly a Volkswagen wagon sedan, according to CHP. The suspect vehicle was last seen traveling northbound on the 55 from Chapman Avenue. A description of the suspect was not immediately available.

Alexis Cloonan said the boy's mother saw a woman driving the vehicle and a man in the passenger seat, but was not sure who fired the shot.

"She (Aiden's mother) was merging to the right side to get away from this person, and as you can see if you go online and look at the photos, there's one bullet shot in the trunk that went through the trunk and right through my nephew," John Cloonan said.

The northbound 55 Freeway was closed for hours at the scene, and video from AIR7 HD showed a phalanx of officers scouring the pavement for evidence.

Speaking to reporters on an empty on-ramp, Olivera issued a plea for witnesses to come forward with any information they may have.

"If your vehicle has a dashcam, we're asking you, please provide that video," he said. "If you were driving by, you saw something that was not right, call it in -- even if it wasn't something major."

The Highway Patrol emphasized that the incident was not connected to the string of more than 80 reported shootings at vehicles on California freeways since April.