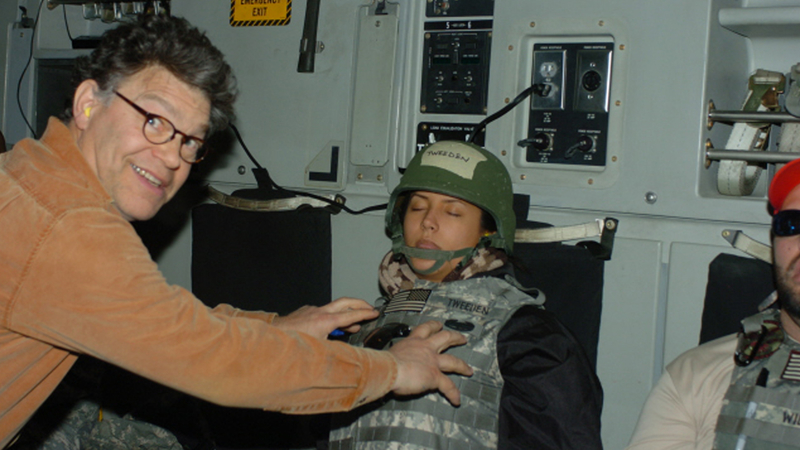 ST. PAUL, Minn. (KABC) -- A Los Angeles radio anchor has accused Minnesota Sen. Al Franken of forcibly kissing her during a 2006 USO tour and of posing for a photo with his hands on her breasts while she slept.

Leeann Tweeden, a morning show anchor for KABC, posted the photo and an article titled "Senator Al Franken Kissed and Groped Me Without My Consent, And There's Nothing Funny About It" on the AM radio station's website.

"I felt belittled. I was ashamed. I've had to live with this for 11 years," she said Thursday. "Somehow it was going to be my fault. It was not going to be worth the fight."

The onetime swimsuit model said she didn't come forward sooner because she feared others would doubt her.

The allegations stem from a trip to entertain the troops in December 2006 -- the year after Franken left "Saturday Night Live" and about 2 1/2 years before he was sworn in as a U.S. senator.

KABC 790 radio personality Leeann Tweeden is multi-tasking today after sharing her own #MeToo story. Tweeden alleges she was forcibly kissed by Senator Al Franken in 2006. “I send my sincerest apologies to Leeann.” - Sen. Franken. #abc7eyewitness pic.twitter.com/tjK2OjkD4c

He allegedly wrote a skit for Tweeden and himself that included sexual innuendo and a kiss and brought a women's thong as a prop that he waved around during their performance. Tweeden told The Associated Press that Franken insisted they practice kissing beforehand despite her protests.

"We did the line leading up to the kiss and then he came at me," she wrote, "put his hand on the back of my head, mashed his lips against mine and aggressively stuck his tongue in my mouth."

The photo, taken during the trip home from Afghanistan, shows Franken grinning at the camera while reaching toward Tweeden's chest with both hands while she sleeps.

In his initial response on Thursday, Franken apologized but questioned the radio anchor's memory of the skit. He later issued a longer statement.

"While I don't remember the rehearsal for the skit as Leeann does, I understand why we need to listen to and believe women's experiences," Franken said. "Coming from the world of comedy, I've told and written a lot of jokes that I once thought were funny but later came to realize were just plain offensive."

Franken went on to say that he feels "disgusted" with himself when he looks at the photo now.

"It isn't funny," he added. "It's completely inappropriate. It's obvious how Leeann would feel violated by that picture."