Franken apologizes to woman who says he kissed, groped her 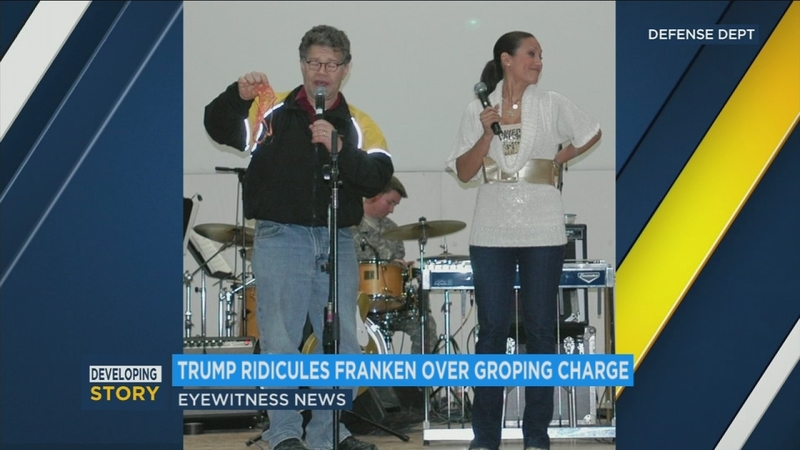 Franken apologizes to woman who says he kissed, groped her

ST. PAUL, Minn. (KABC) -- Minnesota Sen. Al Franken personally apologized to the woman who has accused him of forcibly kissing her and groping her during a 2006 USO tour, saying he remembers their encounter differently but he is "ashamed that my actions ruined that experience for you."

In a jarring photo, Franken is seen pretending to grope radio anchor Leeann Tweeden while she is asleep on a return flight from Afghanistan.

"I was belittled and humiliated," Tweeden said Friday in an interview on "Good Morning America." "And that's never funny."

Tweeden also claimed Franken, at the time a comedian, forced her to rehearse a kissing scene for a skit he had written.

"He mashed his lips against my face," Tweeden said at a Thursday press conference. "And he stuck his tongue in my mouth so fast."

Franken said he doesn't remember the rehearsal as Tweeden does, but he apologized in a statement.

"There's no excuse," he said of the photo. "I look at it now and feel disgusted with myself. It isn't funny. It's completely inappropriate. It's obvious how Leeann would feel violated by that picture."

Tweeden described the apology as heartfelt.

President Donald Trump, who has remained silent about the multiple accusations of sexual misconduct against Alabama Senate candidate Roy Moore, tweeted about Franken on Thursday evening.

Franken said he would support a Senate ethics investigation into his behavior.