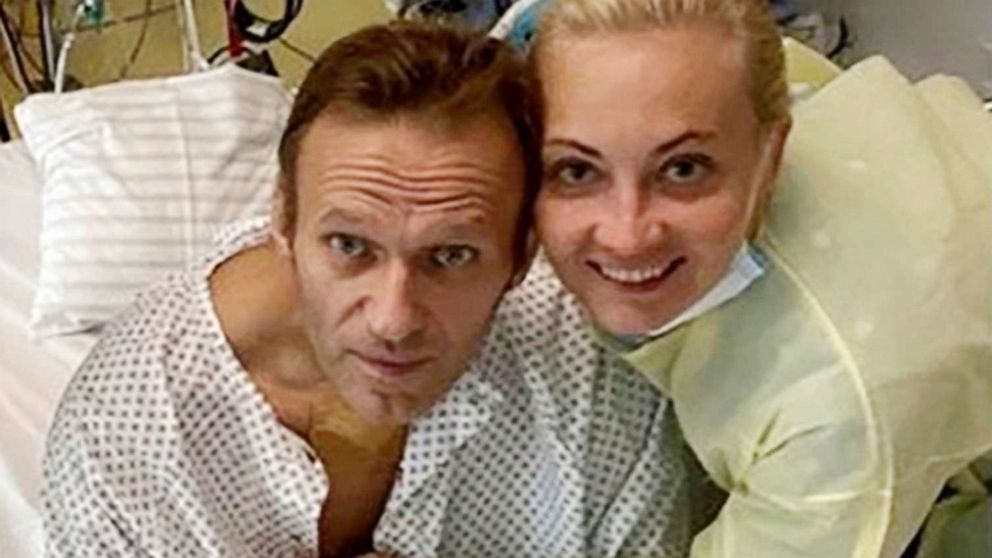 Russian opposition leader Alexey Navalny on Tuesday posted a message for the first time since his suspected poisoning almost a month ago which left him unconscious in an induced coma and fighting for his life.

Navalny posted a photo on Instagram of himself awake and sitting up, surrounded by his wife and two children, in a bed at Berlin's the Charité hospital where he has been treated for the poisoning with a Novichok nerve agent.

"Hi, it's Navalny. I miss you all," Navalny wrote in the post. He wrote, "I still can do almost nothing", but said on Monday he had been able to breathe on his own for the whole day for the first time without a ventilator.

"It's a surprising process underrated by many. I recommend it," Navalny wrote, with the wry humor that has been a hallmark of his opposition work.

Navalny has been treated at the Berlin hospital for more than three weeks, after he was evacuated there having suddenly fallen critically ill aboard a plane in Siberia. Navalny collapsed on the plane, which had to make an emergency landing and he was initially treated in a hospital in the Siberian city of Omsk. After he was airlifted to Germany at his family's insistence, German doctors quickly said they believed he had been poisoned, despite claims from Russian doctors that they had found no trace of that.

Navalny's team announced early last week that he had regained consciousness from the artificial coma and that his condition was improving although he remained very weak. On Monday, the Charité issued a statement that Navalny's condition "continues to improve" and that he was now able to get out of bed and was beginning to try to move around.

Navalny's spokeswoman Kira Yarmysh on Monday confirmed that Navalny intends to return to Russia once he has recovered. "I confirm it once again to everyone: no other options have ever been considered," Yarmysh wrote on Twitter.

Germany's government has said toxicology tests have shown Navalny was poisoned with a nerve agent from the Novichok group, a type of military chemical weapon developed secretly by the Soviet Union, a variant of which was used to poison the Russian double agent Sergey Skripal in the English town on Salisbury in 2018. Germany and other European countries and the United States have condemned Navalny's poisoning and demanded that Russia provide an explanation.

On Monday, Germany said specialised labs in France and Sweden had also confirmed that Navalny was exposed to a Novichok type nerve agent. France's president Emmanuel Macron called Russia's president Vladimir Putin to inform him and to urge Russia to immediately "shed light without delay" on the circumstances on the attempt on Navalny's life.Russia's government has denied any involvement in Navalny's sickness and insisted Russian doctors found no evidence he was poisoned.

Russian doctors have continued to say their tests found no sign Navalny had been poisoned and instead suggested he was suffering from a "metabolic disorder" that caused him to suffer a sudden drop in blood sugar. Navalny's colleagues and family have accused Russian authorities of pressuring the doctors to cover up his poisoning.

The Kremlin's spokesman Dmitry Peskov on Tuesday said it would "only be glad" if Navalny was recovering and that for now it had only "an utter incomprehension" around what was happening in the case.

The head of Russia's foreign intelligence agency and a powerful ally of Putin, Sergey Naryshkin, in an interview on Tuesday claimed that there was no evidence Navalny had been poisoned in Russia and called accusations that Novichok nerve agents existed still in Russia "disinformation," saying they had all been destroyed.

"It is a fact that the moment Alexei Navalny left the Russian territory there were no toxins in his system. Therefore, we have many questions to the German side," Naryshkin was quoted by the state news agency TASS.

"No signs of toxins were found in the system of Alexei Navalny; there were none," Naryshkin said.

This week, Reuters cited five medical sources that the paramedics who first treated Navalny at the airport in Omsk had found signs he had been poisoned and no indication he was suffering from low blood sugar as claimed by more senior doctors later.

Navalny is Russia's most prominent opposition leader, who has built up a following through investigations exposing alleged corruption among top Russian officials and Kremlin allies. Alongside the investigations he has built a grassroots political movement that recently he has sought to use to attack the support of Putin's ruling party, United Russia.