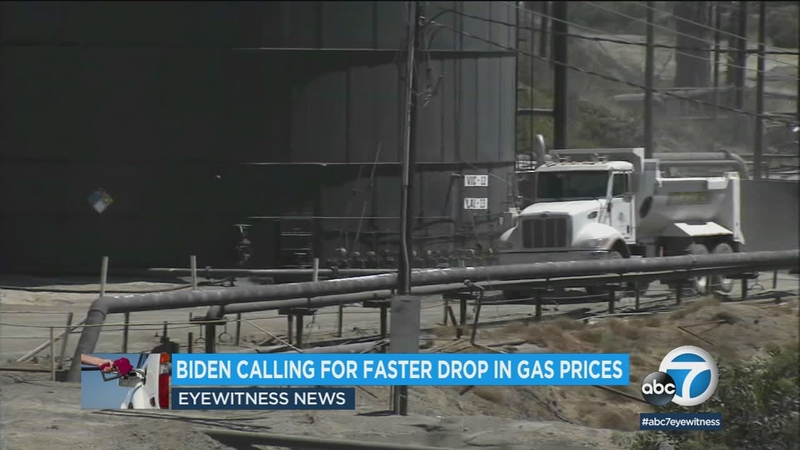 The demonstration was held outside an Amazon warehouse and Uber Greenlight hub, where several of the participants held signs depicting a skeletal figure and the words "RUNNING ON EMPTY," "WE CAN'T AFFORD GAS" and "TECH GIANTS, PAY UP."

Khatrna Cot, a single mother of two, said she likes the flexibility of Amazon Flex but she doesn't know how much longer she can afford to drive for the company.

"I have too many routes, with different cities, and right now that's too expensive for us," she told ABC7. "I can't deliver anymore. We need more pay for us."

As independent contractors, the drivers are responsible for their own gas. Some say they are spending as much as $300 a week to make their deliveries.

As gas prices continue to climb, thieves are turning to stealing gas through a variety of ways that include targeting gas stations or individual vehicles.

"I do this part time, but I know there's a bunch of people that do this full time and are supporting families out here and it's hard," said Ramon Jauregui, an Amazon Flex driver.

On Wednesday, Uber began implementing fuel surcharges. Uber customers will pay a surcharge of either 45 cents or 55 cents on each trip. The company says 100% of the money goes directly to drivers. The surcharge is temporary; Uber plans to reassess in 2 months.

"Just the price of living going up, people aren't tipping as well, either, so it's kind of like getting hit from both sides," Jauregui said.

In Los Angeles County, a gallon of regular gas is averaging $5.87. That price marks the 22nd record high in as many days.