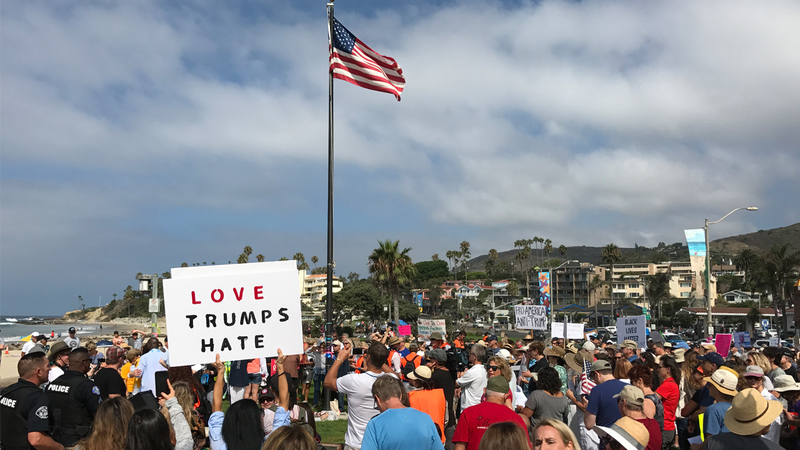 LAGUNA BEACH, Calif. (KABC) -- Rallies against bigotry and hate took place all over Southern California and across the country Saturday.

On the Venice Beach Boardwalk, another group rallied, holding signs and chanting against hate in light of the deadly events in Chartlottesville, Va.

The event, which began at 10 a.m. at Main Beach, was dubbed "From Charlottesville to Laguna Beach: We Stand Together" in a Facebook post that invited people to attend.

"Heeding the call from the Movement for Black Lives for a national action and solidarity with Charlottesville, Va., on Saturday and in response to the encroachments of racists and white supremacists on Sunday into beautiful Laguna Beach as the bastion for diversity, liberty and equality, we're holding a unity rally with Mayor Toni Iseman," the social media post said. "Our message is loud and clear: Hate is not welcome here!"

The day before a planned right-wing rally in Laguna Beach, hundreds of counterprotesters peacefully demonstrated Saturday in the coastal Orange County city.

Among the protesters against Sunday's event was Susan Emerson, who is a Costa Mesa resident originally from Virginia. She came out after she saw what happened in Charlottesville.

"My heart is breaking for all of us," she said. "That doesn't represent the people I know and love in Virginia. That does not represent them."

A small group of officers kept an eye on the crowd of about 500 people. They also made sure tourists would not be impacted by the protest.

This group is protesting an #AmericaFirst rally Sunday. That rally is for victims of crimes group says were committed by "illegals/refugees" pic.twitter.com/1TOSrCa0WE

Activists carried signs with such statements as "LOVE TRUMPS HATE" and "PRO-AMERICA, ANTI-TRUMP."

The group also placed unity ribbons around the area as a subtle message to the hate they expect will be at the rally.

"Not just violent crime" victims will be the focus of the rally, Benitez said, "but all of the repercussions of people who came here who shouldn't be here. ... I don't see it as a refugee crisis -- it's a cheap labor scheme."

Since his events have been violence-free in the past, if there are conflicts Sunday then, "We'll know which elements made it happen," he said.

Sgt. Jim Cota, a spokesman for the Laguna Police Department, said earlier in the week that he was confident his department could handle the demonstration.

About 80 people showed for the most recent rally on July 30, Cota said. "We're ready for this. They can bring out the whole world and we'll be ready for them," the sergeant added.

Demonstrators also faced off against officers in riot gear in Dallas, Texas. Tensions mounted after police broke up a clash between people rallying against white supremacy and supporters of a Confederate monument housed in a cemetery. About 2,300 people were in attendance.

In Boston, 40,000 people took to the streets to march against bigotry. Police were concerned that a small group of conservatives holding a free speech rally would be joined by white nationalists, so they escorted the group away from the anti-hate crowd.

President Donald Trump, who has been criticized for his responses to the Charlottesville violence, tweeted out support for the police.

Looks like many anti-police agitators in Boston. Police are looking tough and smart! Thank you.

He later tweeted that people protesting was a form of healing that is needed to strengthen this country.