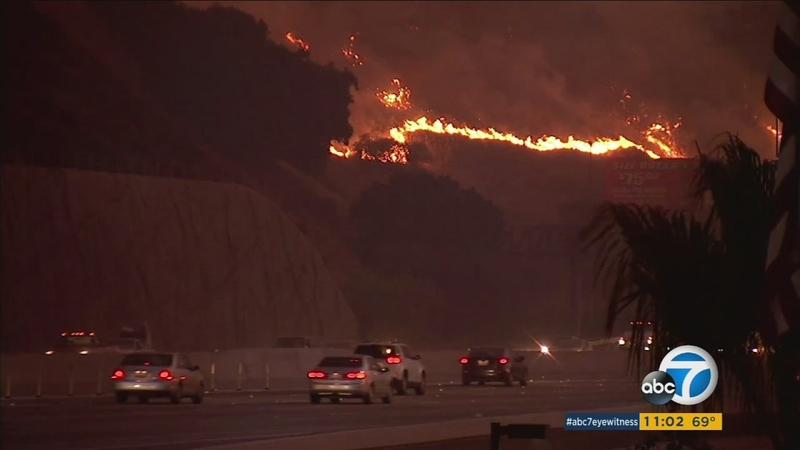 ANAHEIM, Calif. (KABC) -- Firefighters battled a fast-moving brush fire burning along the 91 Freeway near the border of Anaheim and Corona Monday afternoon, which prompted evacuations.

The brush fire, officially named the Canyon Fire, was reported near the eastbound 91 at Coal Canyon Road, according to the Orange County Fire Authority.

The acreage was first estimated at 25-30 acres and within hours exploded to at least 2,000 acres, according to fire officials. By Monday evening, it was only 5 percent contained.

Dominguez Ranch Road was closed at Green River Road to incoming traffic. By 7 p.m., evacuation orders were expanded to areas south of Green River Road from the 91 Freeway to Trudy Lane at Orchard Glen.

In a tweet, Anaheim Fire and Rescue stated that Dominguez Ranch was evacuated with an estimated 300 homes. In total about 600 residents were evacuated from Corona, officials said.

CORONA EVACUATIONS for the #CanyonFire on the following streets: pic.twitter.com/bq0BIXd63c

EVACUATION ORDER: All homes south of Green River Rd from the 91 Fwy to Trudy Lane, including the Orchard Glen Tract, are being evacuated. pic.twitter.com/YDNbGJ5fAJ

Residents in one evacuated neighborhood saw flames swirl around their homes.

"The wind obviously shifted directions. It was heading toward Orange County, and then it did a 180 and headed back extremely fast. Then once it got into our boxed canyon, it's almost like the wind was swirling around and embers were flying everywhere," resident Rick Krumes said.

Fire crews prepare for what to do against the Canyon Fire Tuesday morning as the flames calm down Monday night.

By 4:30 p.m., the winds shifted and caused the fire to burn back toward the eastbound side of the 91 Freeway. Firefighters were burning fuel along the freeway near the roadway to keep the blaze from spreading into the area.

There were more than 300 firefighters on the ground, along with five water-dropping helicopters and three fixed-wing aircrafts, authorities said.

Traffic was heavily impacted as Caltrans officials closed three of seven lanes on the eastbound 91 just east of Coal Canyon Road, as well as the 241 Freeway.

Authorities said traffic will continue to be heavy on the freeways for the Tuesday morning commute.

The blaze was moving so quickly, it was making its way into Chino Hills State Park from Pipeline Road.

No injures had been reported, but one home was damaged and a semi-truck trailer burned.