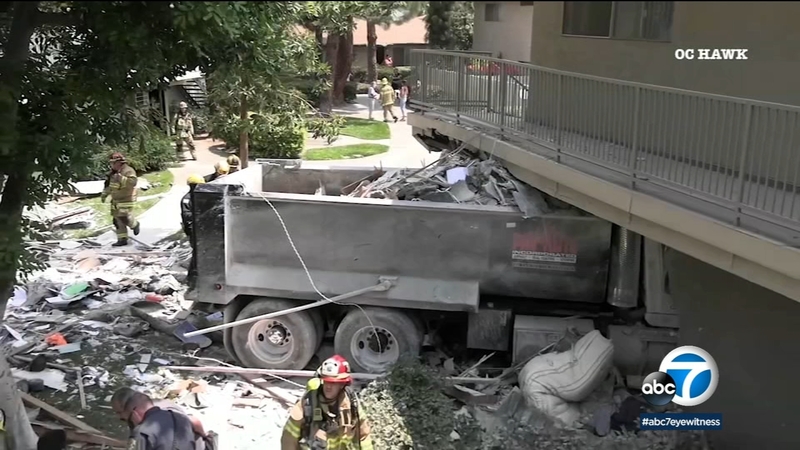 ANAHEIM, Calif. (KABC) -- One person was killed and two were injured when a dump truck flew off the 57 Freeway and smashed into two Anaheim apartment buildings Tuesday, officials say.

The crash was reported around 12:40 p.m. at an apartment complex on Lincoln Avenue near the freeway.

The truck somehow lost control and crashed into two vehicles on the southbound 57 offramp at Lincoln, then flew down the side of the embankment, crashing through the wall of a carport and then smashing through two apartment buildings.

One person inside an apartment building, identified by authorities as 61-year-old Rory Antoine, was killed.

One person was killed and two were injured when a dump truck flew off the 57 Freeway and smashed into an Anaheim apartment complex.

The driver of the truck, 54-year-old Rafael Pacheco, was taken to the hospital with moderate injuries, according to the California Highway Patrol. A 69-year-old man, a driver struck by the truck, was hospitalized with minor injuries. Firefighters continued to search through the debris of the building to see if there were any more dead or injured.

Wood debris and other building materials were left scattered around the grounds of one of the complexes, with the truck lodged into the side of the building.

Anaheim firefighters helped recover dogs and other pets for residents of an Anaheim apartment complex after a truck crashed through the building.

Residents of some apartment units were displaced after the crash. Firefighters helped reunite them with dogs, rabbits and other pets that had been separated in the chaos.

Patricia Johnson said she and her dog had been homeless before moving into the building. Now with her unit destroyed they are homeless again.

"I was homeless before," Johnson said. "And this is the first place I've been to on my own. I wasn't homeless no more. And I had my dog. Me and the dog lived in the shelter."

"And now we're homeless again. But we're together."

Officials are still evaluating the damage, but several units are expected to be condemned as uninhabitable. Two buildings at one complex, housing about four dozen units, are expected to remain without power at least through the evening.

The American Red Cross was on scene providing assistance to displaced families.