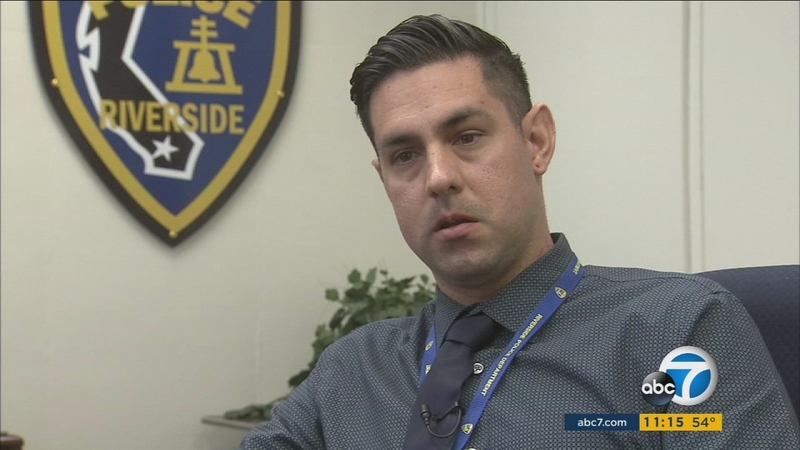 RIVERSIDE, Calif. (KABC) -- He was shot nine times by infamous cop killer Christopher Dorner and lived. Now for the first time, Officer Andrew Tachias relives the night that left his partner dead, him fighting for his life and put the Southland in the grips of a vicious killing spree.

The date was Feb. 7, 2013. It was a Thursday, and Tachias had only been on the Riverside police force for about two months. He said it started out like a typical shift.

"We were driving towards Magnolia, kind of just joking around with each other," Tachias recalled.

But a moment later, there was a flash. Tachias and his partner Michael Crain were ambushed by rouge ex-Los Angeles police officer Christopher Dorner.

"The next thing I remember is us being shot," he said.

A Good Samaritan driving a taxi cab spotted Tachias and Crain. He rushed to their aid and called for assisted Tachias in radioing for help.

"I could see him kind of reaching toward my body, and I'm assuming it was to grab the microphone, so I directly him to the car mic, and he held it up to my mouth for me and I was able to get help," Tachias described.

While Tachias would survive, his partner would not.

"I had an idea things weren't looking good because I turned to him in the car and asked if he was alright, and I didn't get a response," Tachias said.

Tachias was shot nine times that night, including in his arms, back and legs. But he continued to fight.

"I was bleeding out and it was more of a mental game than a physical one for me," he explained. "Things got real rough, and I felt that if I were to just close my eyes I would pass that night."

But Tachias found the will to survive and today is back at work. His road to recovery has been filled with physical struggles such as body aches, but even more so the heartache too, dealing with what's known as "survivor's guilt."

"It's tough for me when I think about a married man with kids, served in the military, and put a lot of time in the streets; I don't have all that and I wonder why him and not me," Tachias said.

And for a man who's always been athletic, including running track at UC Riverside, to not even be able to do a single pushup has been tough.

"It's embarrassing for one, knowing I don't have great strength," he said.

But Tachias set goals, including losing weight and building muscle.

As for trying to once again do pushups, that was the goal for his last birthday. He would not be denied.