Reopening Angel Stadium: What fans can expect as tickets go on sale this week 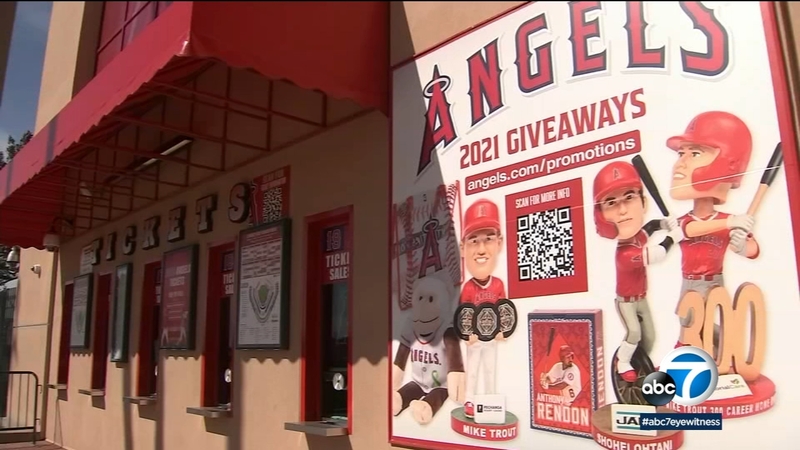 Reopening Angel Stadium: What fans should expect as tickets go on sale this week

ANAHEIM, Calif. (KABC) -- While tickets for all April home games go on sale this Friday, some fans were able to get first grabs this week, including season ticket holders and anyone who had credit from last year.

After being away for a whole season, fans are eager to finally get back inside the stadium and watch games live again.

"Here in California, I didn't think they were going to allow us to go until maybe mid-season, so to find out that opening day was gonna be available was pretty crazy," said Salvador Alaniz.

He's one of the first Angels fans to purchase pre-sale tickets this week. The Palm Desert resident is thrilled to finally get his family back to Angel Stadium, especially his 10-year-old son.

"We really wanted to get him back there again, it was just the best day of his life, is what he says, so it was huge to be able to get the tickets to take him back," said Alaniz.

They'll be returning to health and safety changes throughout the ballpark. This season, there will be no tailgating, no cash transactions, no bags to avoid touching at security, and face coverings are required for everyone over two years old. Physical distancing will be maintained by limiting capacity to about 9,200 fans that will sit in pods of two to six people.

Localish caught up with former Dodgers star Adrian Gonzalez to talk about his new at home workout and how he has been spending his time during the pandemic.

Anaheim resident William Albarran also bought his tickets this week. He got a taste of the new changes at spring training in Arizona.

"From going to spring training, I've already kind of had that feel this year, it's a lot more intimate. The players are going to hear you if you scream for sure. It's gonna be different but I'm excited for it," said Albarran.

Despite the new look and feel, he's just excited to go.

"I'm just grateful to be back in the stands, smelling the grass and hearing the bat smack the ball. I'm just excited to be back," he said.

Even if it means no high-fives to the stranger next to you.

"Getting to be around the rest of the fans, enjoying it with them as well is always, makes it better, makes it a little more exciting when you're out there in the crowd and stuff, but getting to see the game is what's most important," said Alaniz.

Tickets for all Angels home games in April go on sale Friday starting at 9 a.m. But there's no more ticket office -- fans will need to purchase tickets online only at Angels.com.