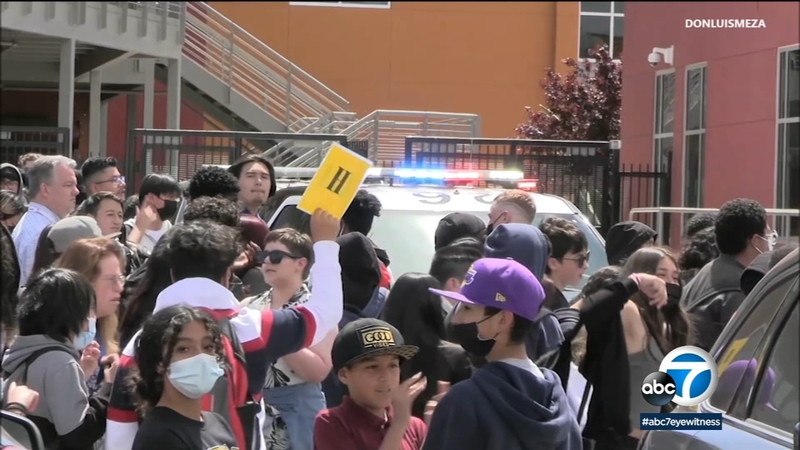 PALMDALE, Calif. (KABC) -- A threat of a school shooting posted on social media led to panic on an Antelope Valley campus Monday, and the initial response by the Los Angeles County Sheriff's Department prompted criticism from parents.

Students heading back to school following Spring Break were on edge after the chilling social media threat by a student, which stated: "School shooting tomorrow April 5th. I'm done dealing with school everyone will go down tomorrow."

On the heels of this post, fear, panic and chaos filled the air at the Palmdale Aerospace Academy. This followed what L.A. County Sheriff's deputies say was a bomb threat at the school.

Students and faculty evacuated the campus. Parents rushed to the school after their kids, not the school, called to pick them up.

"The school let us know there was a threat of a kid coming to the school for tomorrow the 5th," parent Jose Vasquez said. "My daughter calls me today about an hour ago saying now there's a threat of a bomb today at the school. The school failed to inform us about it.

"They're not coordinated, they're not prepared. This is not the first time the school has these type of issues and it's always the same thing. Arms up in the air and they don't do anything about it."

Jackie, a parent who asked to only be identified by his first name, was one of those parents frantically heading to pick up his child.

According to an update issued by the school district shortly after 3 p.m., there was not an active shooter at the school and no injuries were reported.

"All the kids are in there scared," Jackie said. "They don't know what's going on. A lot of kids can't make contact with their parents, they are just trying to find out what's going on."

"While onsite investigating a weapons threat, deputies from the Los Angeles County Sheriff's Department notified TPAA administration that a bomb threat for our Academy had been called into the Palmdale Sheriff's Station," the statement said in part. "The deputies onsite immediately took control of the campus and began directing TPAA Staff and Administration on how to best evacuate our students. Under the Deputies' direction, our staff initiated a fire alarm, and our students followed normal evacuation procedures. At that time a decision was made to move students from the interim evacuation area to the soccer field."

With the images of past mass school shootings forever in our minds, it was a parent's worst nightmare to learn a shooting threat has been made against their child's school.

"I don't think my son is coming back here," Endeley, who only identified himself by his first name, said. "We are supremely disappointed with the school today. We don't know anything. We were told there might be an incident tomorrow and then today we had our kids calling us screaming that they need to get out of the school. We get there and they've got this weird protocol set up, telling us to be calm. This is wrong, man."

The sheriff's Palmdale station released a statement on social media after the apparent threat and response.

"We were initially advised that a bomb threat drill was taking place and to notify the community not to panic," the statement said. "Upon further investigation, we determined that an actual threat had been made towards the school. Our deputies remain on scene and are ascertaining further. We apologize for any miscommunication or false information that was relayed to the public."

In 2022 alone, there have been more than 107 mass shootings in the United States. Many parents will not hesitate to pull their children out of school the second they learn about any threat, not waiting for it to be investigated to determine if it's a hoax.

The Sheriff's Department "handled yesterday's threats with grave seriousness and the deputies onsite did an amazing job," Braswell's statement said. "We have been notified there has been an arrest associated with yesterday's events as well as a continuing investigation.

"Emergency situations escalate quickly, and there are certainly lessons we learned that can be incorporated into our safety protocols going forward," Braswell added. "We will also work with our local law enforcement agencies on how to include their protocols into our safety plans.