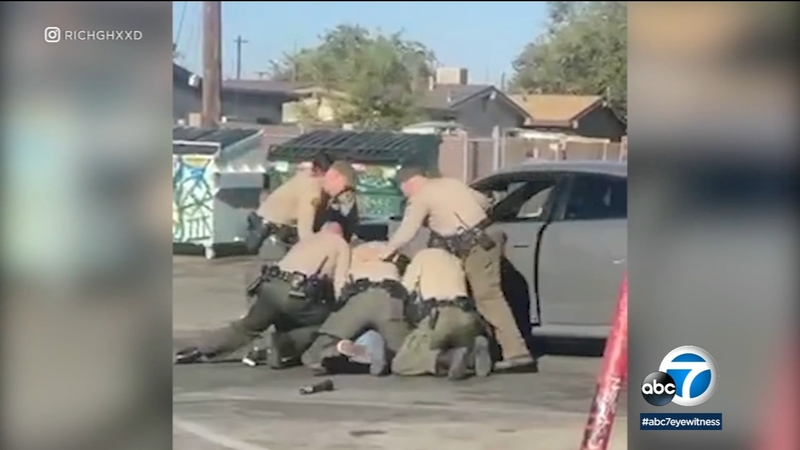 PALMDALE, Calif. (KABC) -- The defense attorney and girlfriend of a man who was seen on video in a violent encounter with sheriff's deputies in Palmdale are speaking out, saying the man did not do anything to justify the use of force.

Samuel Reyes has bruises and cuts on his body and his eyes are beaten black and blue.

The 35-year-old suffered significant injuries during the encounter with Los Angeles County Sheriff's deputies on Aug. 28.

"He was wrongfully beaten, shocked, bitten, and choked by the police for no reason at all," said Amber Simmons, who is Reyes' girlfriend.

Simmons said she was sitting in a parked car with her boyfriend that day when two deputies pulled up and ran over to their car. She said they were soon joined by several other deputies.

"They were punching him at first and then they tased him and I guess once more officers came they yanked him out of the car by his foot and tased him again, kicked him in his head," Simmons said.

A use of force investigation has been launched after video captured L.A. County sheriff's deputies punching a man repeatedly in Palmdale during a DUI investigation.

Reyes was taken into custody and charged with resisting arrest. The sheriff's department says deputies were conducting a driving under the influence investigation when the use of force ensued.

"Continued to be punched and kneed. Those are actions that do not appear to be objectively reasonable or justified," attorney Bradley Gage said.

"He was stopped in a parking lot because his girlfriend, as I understand, wasn't feeling well, something that's neither suspicious nor grounds for probable cause. Certainly not justification for the (deputies) to cause the pain and injury that we see in the video," Gage said.