A suspect was seen on surveillance video hurling objects such as rocks at the church's glass doors, which shattered them, police said.
KABC
By Jessica De Nova 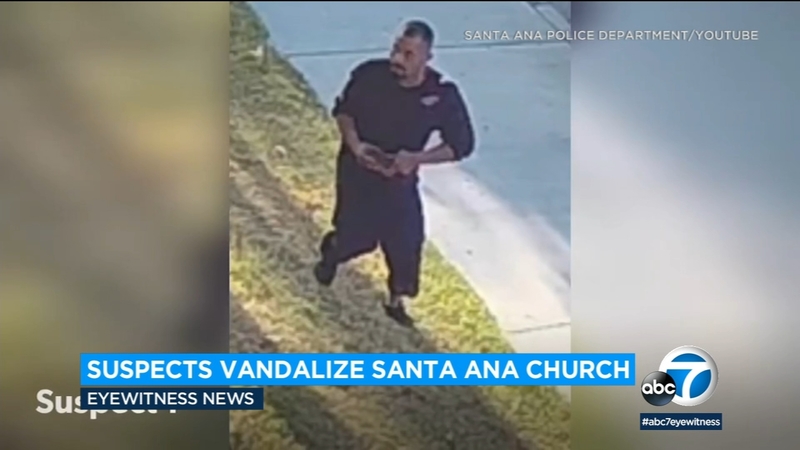 SANTA ANA, Calif. (KABC) -- Santa Ana police on Thursday released surveillance video of two incidents of vandalism at a church in the hopes it would generate leads to an arrest of the vandals.

An outdoor service was being held when churchgoers heard banging on a wall on the church's south side. A suspect was seen on surveillance video hurling objects such as rocks at the church's glass doors, which shattered them, police said.

Video of the Aug. 23 crime was posted to YouTube by Santa Ana police.

The incident happened as worshippers prepared for the most sacred moment of service: communion. A security camera captured the outdoor service.

"All of a sudden, you just start to hear what people thought to be as gunshots," said Father Kyrillos Guirguis.

On the side of the church, surveillance video shows another suspect hurling objects the building. The confusion turned to fear and panic among the congregants but the man was later seen walking by the group and leaving.

The most recent incident occurred about 3:10 a.m. Monday when a suspect threw objects such as concrete and rocks at the church's glass doors again.

Security footage shows the man throwing at least two objects at the building before walking away while yelling profanities in Spanish, leaving behind cracked windows and a door in need of replacement.

Leaders and congregants of the church fear their religious refuge is under attack.

"Something that's alarming to us and of concern is the proximity of the (incidents) and just the brazenness," said Guirguis when referring to the two vandalism incidents and two break-ins and attempted burglaries.

Kyrillos Ibrahim says, like many other followers of his faith, his parents came to the U.S. to escape religious persecution and worship in peace.

"Leaving everything, their careers and families in Egypt, and coming here to start a new life for us and then we see these same incidents following us here. It's tragic," the congregant said.

Police do not suspect the attacks are hate crimes, but the investigation is ongoing. Anyone with helpful information for investigators was asked to call Detective Rashad Wilson at 714-245-8551, or email him at RashadWilson@santa-ana.org.