kabc
By ABC7
LOS ANGELES One person is dead and another severely injured after the shooting. The two suspects remain on the loose Tuesday.

Click in the Eyewitness News Story Window above to watch the accompanying video to this story.

Police are still searching for a motive, but they don't believe the double shooting was gang related.

Officers say two men were waiting at an outside walk-up window at Tams Burgers at Florence and Vermont just before midnight when two gunmen walked up and opened fire.

One of the men was shot back of the head. The second victim turned around when he heard the gunshot and was shot in the face. He is undergoing surgery. His condition has not been released, but he is expected to survive.

The man's friend died from the gunshot wound to the back of the head at a local hospital.

Witnesses say the two shooters fled on foot. They were last seen running from the scene wearing hooded sweatshirts. No other suspect description has been made available.

Detectives are asking for more witnesses to come forward. If you have any information on the shooting or where the suspects may be, you're asked to call the LAPD 77th Station at (213) 485-4164. 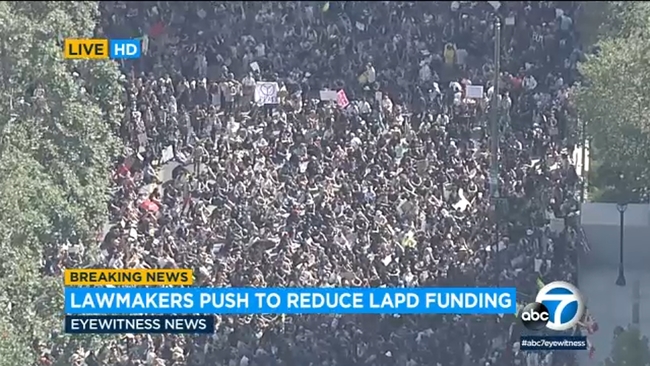