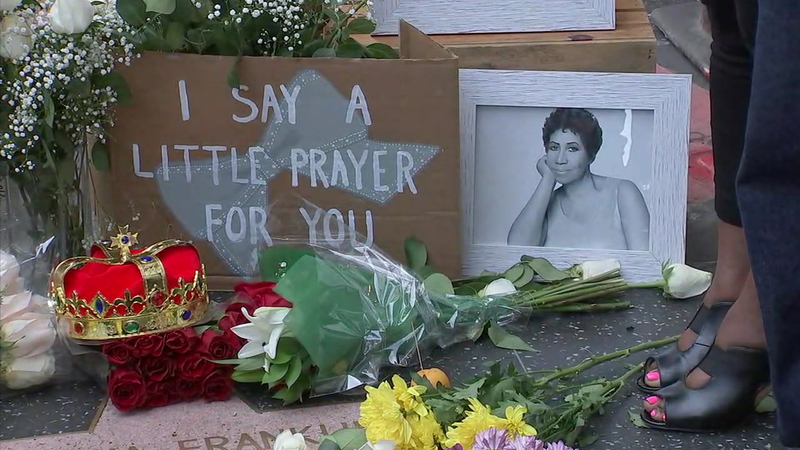 HOLLYWOOD, LOS ANGELES (KABC) -- Aretha Franklin fans showed their love for the late "Queen of Soul" by bringing flowers, photos and even a crown to the singer's star on the Hollywood Walk of Fame.

Fans flocked to the star throughout Thursday after hearing the news of the singer's death. They sang and shared recollections of the music icon.

"My father played her music growing up in our home. He blasted it in the living room, and so we've known her in our lives since we were little," said Thembekila Smart, who said her favorite Franklin song was "Respect."

Crowds gather at the Apollo Theater in Harlem, New York to honor Aretha Franklin after her death.

"She's the 'Queen of Soul.' She touched every part of me when I was a youngster (and during) Vietnam," said Martin Wade.


Franklin died from the advanced stages of pancreatic cancer. Some who had met her could not contain their emotions reflecting on just how humble and loving she was to them.

"Her legacy is written in my heart," Wade said.

Aretha Franklin fans around Los Angeles showed their love for the late "Queen of Soul" on Thursday.

Pink's Hot Dogs, one of Franklin's favorite restaurants, also paid tribute to her on Thursday by using condiments to spell her name on hot dogs.

From topping the charts with "Respect" to performing at presidential inaugurations and winning 18 Grammys, these are the major milestones of Aretha Franklin's life and career.