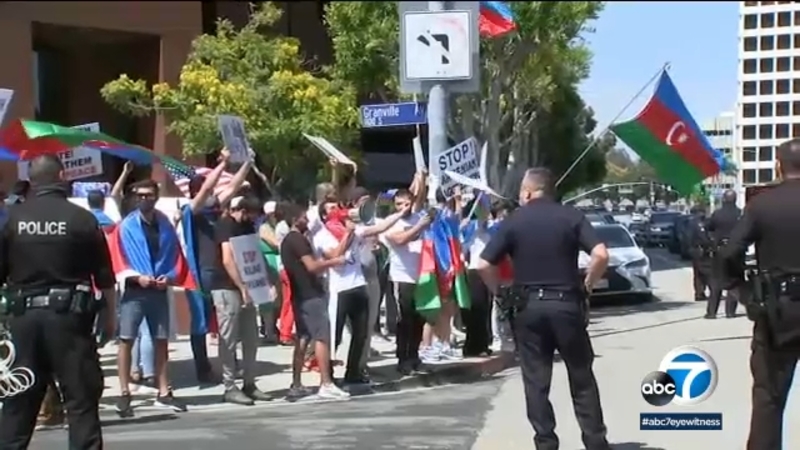 LOS ANGELES (KABC) -- A bloody conflict between Armenia and Azerbaijan has left more than 350 dead and Armenian-Americans demanding action.

The Armenian National Committee of America wants the United States and other members of the international community to hit Azerbaijan with sanctions.

The group is organizing a mass protest at 3 p.m. on Sunday in Los Angeles. The demonstrators will march from Pan Pacific Park to the Turkish Consul General's office in Los Angeles.

"We're expecting tens of thousands of Armenians throughout Southern California to join together in this march on the weekend," said Alex Galitsky, ANCA-WR's communications director.

Salpi Ghazarian, the director of USC's Institute of Armenian Studies, says the recent fighting centers on the Nogorno-Karabakh region that mostly identifies as Armenian, but has been claimed by Azerbaijan since the 1920s.

Armenia and Azerbaijan have been at odds over the region since the Soviet Union dissolved in the early 1990s and a 26-year-old ceasefire was shattered last month.

"It was a multi-pronged attack by Azerbaijan," Ghazarian told Eyewitness News. "Is this simply the first of several steps to ethnic cleansing? What is Azerbaijan's end game here?"

Turkey is accused of supplying Azerbaijan with military help.
"Turkey has played a very direct role in the contracting of Syrian mercenaries to fight for Azerbaijan on the front line, but also in sending in American-made F-16 fighter jets," Galitsky said.

In a written statement, the Turkish Consul General tells Eyewitness News the accusations are false.

"Turkey's MORAL support to Azerbaijan in the recent events is based on international law and the relevant UN resolutions, which call for an immediate end to Armenia's illegal occupation of the Azerbaijani territories." writes Can Oguz, the Consul General of Turkey.

"This is a new war of aggression and occupation unleashed by Armenia against Azerbaijan. Armenia is shelling our major cities, using even the banned cluster bombs. As a result, 31 Azerbaijani civilians, including two children, have been killed, and over 154 wounded. This is a war crime. Azerbaijan is defending itself, its civilians. All the fighting is within Azerbaijan's borders. Armenia has illegally invaded and occupied 20 percent of Azerbaijan, expelling 800,000 Azerbaijanis from the occupied regions, including Nagorno Karabakh and 7 surrounding districts. UN and US condemned this illegal occupation and demanded Armenian forces withdraw from Azerbaijan. Azerbaijan wants peace. For the peace to happen, Armenia needs to withdraw its armed forces from Azerbaijan's occupied lands and allow the forcibly displaced Azerbaijanis to return to their homes. Then Azerbaijanis and Armenians of Nagorno Karabakh will build together a prosperous future, living in peace again as they did so for many centuries."