Army Ranger dies days after being struck by car in Huntington Beach; family searching for answers 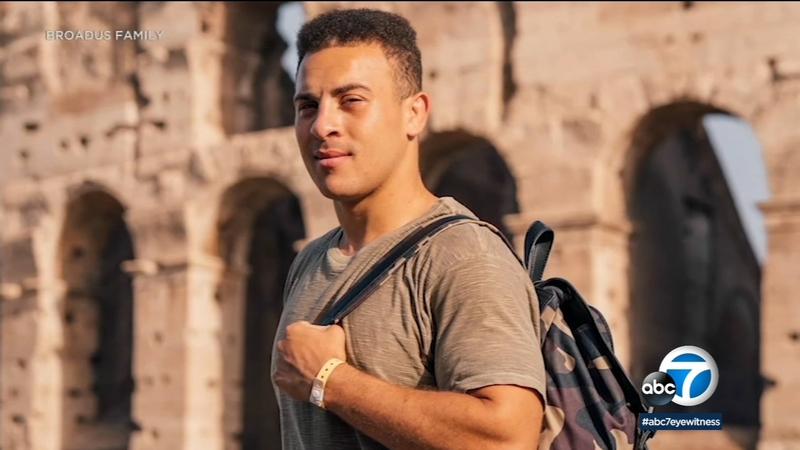 Family searching for answers after Army Ranger's death in OC

HUNTINGTON BEACH, Calif. (KABC) -- A family is in mourning and looking for answers after their loved one, an Army officer from Huntington Beach, went out to celebrate his homecoming, got hit by a car and later died.

They fear there is something more to it.

Stephen Broadus, on his first day back from military service, went out with his friends to The Bungalow bar in Pacific City.

It was a much-awaited return home that turned deadly for an Army officer and Ranger, a West Point graduate.

His sister, Tammy Broadus, remembered a conversation with her brother.

Tammy said her big brother and role model was preparing for a new job in Seattle.

It all ended in the early morning hours on Easter Sunday.

Stephen's family got access to video of the night inside The Bungalow. Tammy said Stephen looked happy, not appearing sloppy when he left the bar just before 2 a.m.

"They weren't drinking a bunch. They were just having fun. We saw him leave," Tammy said.

Just before 5 a.m. that morning, Stephen's family members received the call that changed their lives forever. Stephen was hit by a car on Beach Boulevard between Utica and Adams avenues.

A police spokesperson told Eyewitness News on Tuesday that authorities could not confirm Stephen was assaulted before being hit by the vehicle.

His family said that after brain surgery and nearly a week in an induced coma at UCI Medical Center, the 25-year-old died on April 23.

Stephen's family said they were not convinced his death was simply an unfortunate accident.

Questions remained about what happened between the moment Stephen left the bar and when he was hit, about a three-hour period.

Specialist Joseph Meitl Jr. was killed during a simulated battle exercise at Fort Irwin's National Training Center in the Mojave Desert on Thursday.

Calls and text messages between Stephen and his friends indicated Stephen was on his way to meet one of them in Orange, but was attacked.

Tammy shared screenshots with Eyewitness News from Stephen's friends' phones, showing call times along with notes of the conversations. The first one was at 1:51 a.m., just four minutes after Stephen left The Bungalow.

"His friend did hear arguing in the background, so he knows that there was someone starting something with him," Tammy said.

Nearly 20 minutes later, a text came from Stephen's phone replying, "Nah dude I got jumped twice and got no battery."

Just more than an hour later, Stephen was hit by the car. Police said the driver called 911 and cooperated with officers.

As she mourned the death of her son, Stephen's mother asked people with cameras in the area to check their video of that night. She recalled "his smile, his heart. He always said, 'I love you,' when he got off the phone and that's with his friends, too."

Wondering what his son suffered before getting hit by a car and who was behind the alleged beatings, Stephen's father, Robert Broadus, said he wanted to see an autopsy performed and his only son's body laid to rest at Arlington National Cemetery with a 21-gun salute.

"He is a hero and a veteran," the elder Broadus said, "and he can join the rest of my family members who are also buried over there and get that respect."

Anyone with information on what happened is asked to call the Huntington Beach Police Department. A GoFundMe page has been created to help with costs associated with Stephen's death.