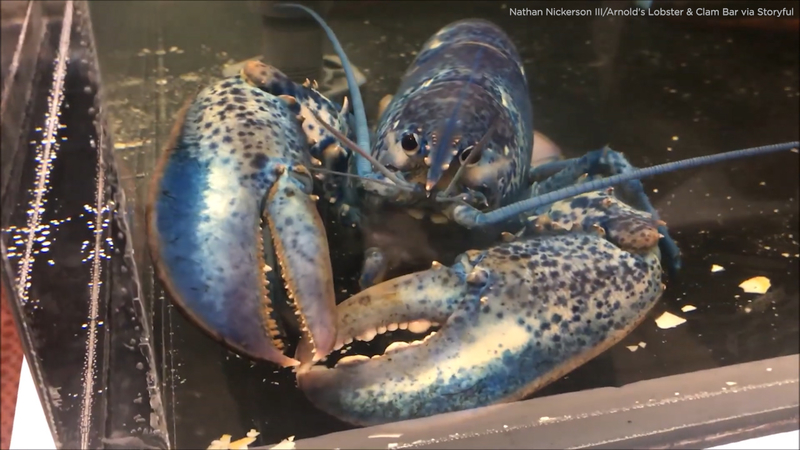 CAPE COD, Mass. -- The incredibly rare blue lobster that captured the world's attention earlier this week is headed to its new home in St. Louis.

The staff at Arnold's Lobster & Clam Bar first shared news of the brilliant blue lobster's arrival on June 8, posting photos from owner Nathan Nickerson III and writing on Facebook that the creature had been caught in the Atlantic and delivered by a supplier.

Restaurant staff followed up on Friday, announcing that the lobster had been donated to the St. Louis Aquarium at Union Station, which is set to open this winter.

"We thank everyone for their interest, kind comments, and well wishes and hope this magnificent blue lobster lives a long happy life among the other Blues of St. Louis!" Arnold's added, a reference to the city's NHL team.

The summer season is off to a colorful start for one Cape Cod restaurant that received an incredibly rare blue lobster out of the blue earlier this week.

From the beginning, Arnold's had made it clear that the rare creature would not be eaten, saying they were exploring either donating to an aquarium or releasing it back into the ocean.

The University of Maine's Lobster Institute pegs the odds of finding a blue lobster at 1 in 2 million.

"The [blue] coloration comes from a genetic defect that causes the lobster to produce an excessive amount of a particular protein that gives the lobster that unique coloration," the institute explained in a fact sheet about colored lobsters.

In the ocean, lobsters are usually blue-green or brown in color, turning their signature bright red during the cooking process. In addition to blue lobsters, the Lobster Institute is aware of live albino, yellow and brilliant red lobsters, as well as lobsters with calico-patterned and split-color shells.

Among the group of uncommon lobsters, the albino is the rarest: the University of Maine said you've only got a 1-in-100-million chance of finding one.