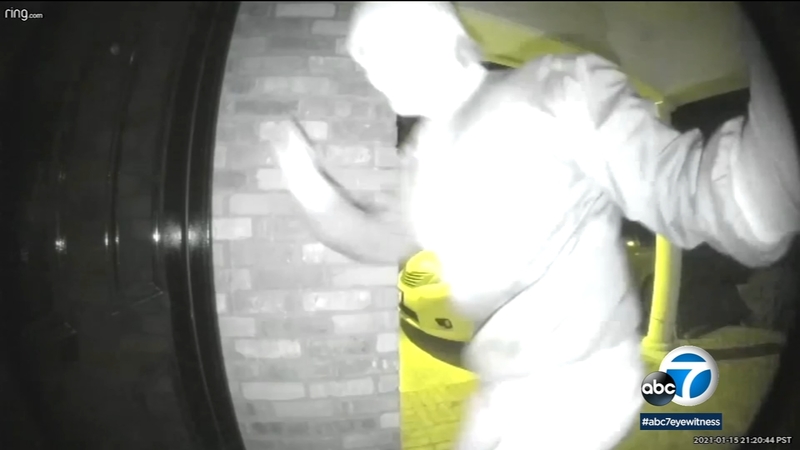 LADERA RANCH, Calif. (KABC) -- Crimes against Asian Americans have seen a sharp rise since the beginning of the pandemic. Neighbors are rallying behind one Orange County family, who have been targeted for months.

Surveillance camera video shows vandals ringing the doorbell at the Ladera Ranch home of Haijun Si and his family in the middle of the night. Sometimes, the culprits pound on the door, throw rocks and shout out racial slurs. The family has been harassed for months.

"This harassment started almost immediately upon them moving here and the fact that it's so clearly tied to their race is deeply upsetting," said Olivia Fu, a Ladera Ranch resident.

Fu was among a large group of community members who held a cultural festival over the weekend to show unity and condemn hate and racism.

"We need to stand in solidarity with the Asian community," said one speaker at the event.

There's growing concern about a string of violent attacks on Asian Americans.

In New York, a man was stabbed in the back in Chinatown Thursday night. A suspect is now in custody charged with a hate crime.

In another brutal incident, a Chinese woman was attacked outside a bakery.

Here in California, a 91-year-old man was knocked to the ground in Oakland.

"Sad, fearful, most of all outraged. This is 2021, it's unacceptable," said California Sen. Dave Min, who participated in the weekend community event.

With incidents of anti-Asian hate crimes on the rise during the pandemic, two SoCal congresswoman are introducing a measure to help protect the AAPI community.

In Los Angeles, authorities are investigating a possible hate crime at a Buddhist temple in Little Tokyo. Vandals knocked over lanterns, shattered a window and set a fire in the entryway.

In Orange County, community volunteers have formed a neighborhood watch, sitting outside the Si family's home to keep vandals away.

"We wanted to create an event that would show the best part of the community. The community together showing up for one another," said Priscilla Huang, who helped organize the weekend event.