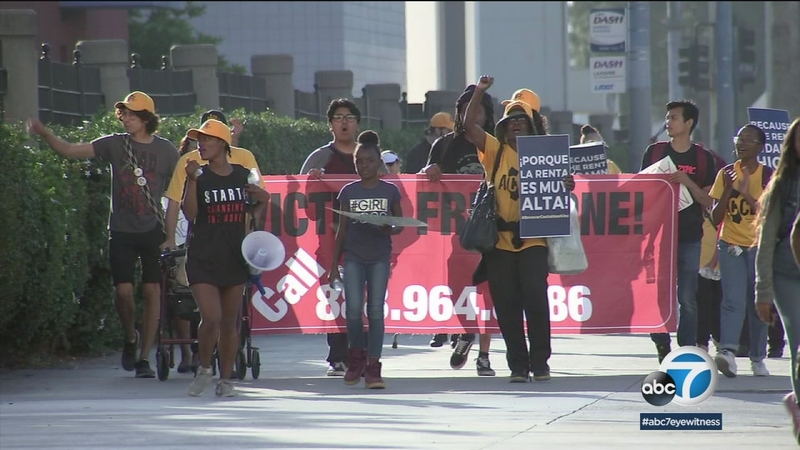 SOUTH LOS ANGELES (KABC) -- A hotly contested plan to overhaul the Baldwin Hills Crenshaw Plaza is moving forward. The Los Angeles city council has given the go-ahead to a plan to give the location an extensive makeover.

Supporters say the makeover will help the mall survive, but those opposed believe it will lead to gentrification, pushing African Americans out of the neighborhood.

The project includes construction of more than 900 new apartments and condos, a hotel and a 10-story office building.

Protestors marched through the neighborhood and rallied outside the mall Thursday evening to voice their opposition to the redevelopment.

They fear many residents of the low-income community surrounding the plaza will be forced out by higher rents.

"This is in a neighborhood where the median income is $25,000 a year and they're proposing housing for folks making over $100,000 a year," said Estuardo Mazriegos of South Los Angeles.

Supporters of the project say the mall has struggled to attract shoppers and adding retail and residential space will help the community.

"I'm not against gentrification at all. I love the fact that everything is getting better and it should be like that all the time," said Cash Black of South Los Angeles. "It should have stayed like that, but they're pushing us out. The people who don't make the finances just can't live in the area."

In a statement, the CEO of the development company, Quintin Primo, said, "Not a single resident will be displaced. The project secures a bright future for this anchor property in the Crenshaw Corridor and brings much-needed new housing to the area."