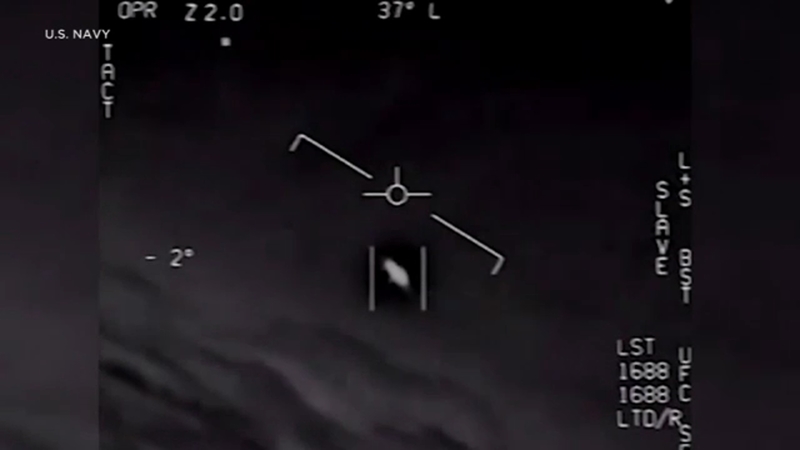 Well, in one way at least: The former president wants to know whether there really are other life forms out there.

In an appearance on "The Late Late Show" earlier this week, Obama confessed this: "The truth is that when I came into office, I asked, right, I was like, 'Alright, is there the lab somewhere where we're keeping the alien specimens and space ship?' And you know, they did a little bit of research and the answer was no."

Which, OK, he was joking. But then Obama said more about UFOs -- and this is where things got really interesting.

"What is true, and I'm actually being serious here, is that there are, there's footage and records of objects in the skies, that we don't know exactly what they are. We can't explain how they moved, their trajectory. They did not have an easily explainable pattern. And so, you know, I think that people still take seriously trying to investigate and figure out what that is."

Obama's admission that there are, in fact "footage and records of objects in the skies, that we don't know exactly what they are. We can't explain how they moved, their trajectory" is in keeping with a broader acknowledgment by official arms of the government -- after decades of denial! -- that UFOs are real. (Side note: Believing UFOs are real does not require believing in aliens; UFOs are simply unidentified flying objects. There is no assumption they contain other life forms.)

Shaq talks to Jimmy Kimmel about paying for a guy's engagement ring at a jewelry store.

Next month, the Office of the Director of National Intelligence and Secretary of Defense will be required to provide the intelligence and armed services committees of Congress with an unclassified report on "unidentified aerial phenomena." That requirement was tucked into the massive $2 trillion coronavirus stimulus bill passed by Congress and signed into law by then-President Donald Trump late last year.

And, it's not just the report to Congress! As CNN's Zachary Cohen noted:

"That report must contain detailed analyses of UFO data and intelligence collected by the Office of Naval Intelligence, the Unidentified Aerial Phenomena Task Force and the FBI, according to the Senate intelligence committee's directive.

"It should also describe in detail 'an interagency process for ensuring timely data collection and centralized analysis of all unidentified aerial phenomena reporting for the Federal Government' and designate an official responsible for that process."

All of which represents, by far, the most the government has ever publicly discussed UFOs.

For many years, former Senate Majority Leader Harry Reid (D-Nevada) was a lonely voice in Congress on the existence of UFOs.

The Defense Department has confirmed that leaked photos and video of "unidentified aerial phenomena" taken in 2019 are indeed legitimate images of unexplained objects.

Back in 2007, Reid pushed for the creation of the Advanced Aerospace Threat Identification Program (AATIP), which was housed within the Department of Defense and about which almost nothing was (or is) known. In a 2017 profile of the program -- headline: "Glowing Auras and 'Black Money': The Pentagon's Mysterious U.F.O. Program" -- The New York Times wrote:

"The Defense Department has never before acknowledged the existence of the program, which it says it shut down in 2012. But its backers say that, while the Pentagon ended funding for the effort at that time, the program remains in existence. For the past five years, they say, officials with the program have continued to investigate episodes brought to them by service members, while also carrying out their other Defense Department duties."

Reid, in an interview for the show "Nevada Newsmakers" in 2019, was unapologetic for the $22 million he had earmarked for AATIP over his time in the Senate. "We know that China is doing it," Reid said in reference to studying unidentified flying objects. "We know that Russia, which is led by someone within the KGB, is doing it, too, so we better take a look at it, too." Added Reid: "We got a volume of research that was done, $22 million worth of research. It showed that not two people, four people or six people or 20 people but hundreds and hundreds of people have seen these things, sometimes all at the same time."

In April 2020, when the Pentagon released three videos of "unidentified aerial phenomena" -- a HUGE breakthrough in the government acknowledging their existence, Reid was nonplussed.

"I'm glad the Pentagon is finally releasing this footage, but it only scratches the surface of research and materials available," tweeted Reid. "The U.S. needs to take a serious, scientific look at this and any potential national security implications. The American people deserve to be informed."

While it's not yet clear what the unclassified report to Congress will say, exactly, what's clear is that the existence of UFOs is now being publicly acknowledged at all levels of government. In an interview with Fox News' Maria Bartiromo in March, John Ratcliffe, who served as DNI during the Trump administration, suggested the report could be a blockbuster.

"Frankly, there are a lot more sightings than have been made public," Ratcliffe said. "We are talking about objects that have been seen by Navy or Air Force pilots, or have been picked up by satellite imagery, that frankly engage in actions that are difficult to explain, movements that are hard to replicate, that we don't have the technology for or are traveling at speeds that exceed the sound barrier without a sonic boom."

In other words: The truth is out there.

The videos have been leaked in recent years, but now the Navy has officially released them.