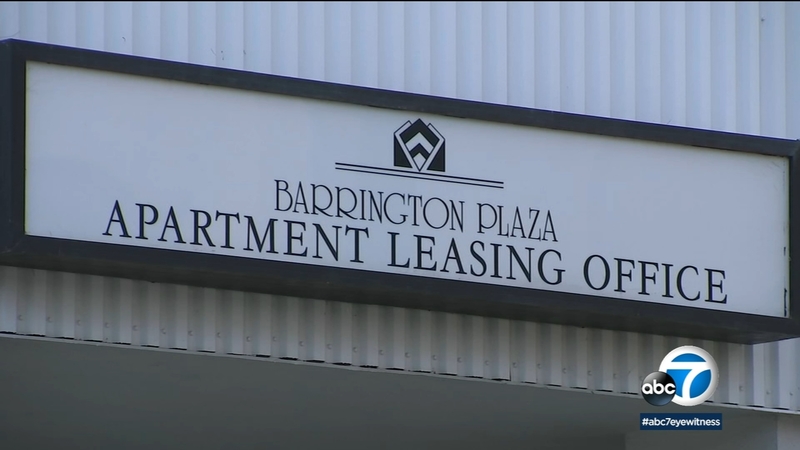 LOS ANGELES (KABC) -- Rosa Barraza is afraid as she walks around her neighborhood after experiencing a sexual assault in her building.

"I'm very nervous. I couldn't sleep last night. I have a big piece of furniture against my door," Barraza told ABC7.

Barraza said she was on her way home Thursday night and went into her apartment building in Barrington Plaza. The suspect was already inside and followed her to her apartment.

"He followed me to my front door and pushed me against the door and rubbed his private parts against my rear end and he ordered me to open my door," Barraza said.

Fearing he could be armed, she didn't open her door and instead fought back.

"I pushed him back with my body and his member was out at all times," she said. "He was pointing out to me, he never spoke, he gave me orders like this, and then I started screaming."

That's when the suspect ran off. She went into her apartment and called police.

A West L.A. apartment that caught fire on Wednesday had no sprinklers even though the same building burned seven years ago, authorities said.

Los Angeles Police Department officers filed a sexual battery report. We reached out to detectives but they declined to comment, as they rarely comment on sexual assault cases.

Barraza is angry because the building should be secure.

"To park your car, to go into the community, you have to have a fob" Barraza said. "There is no way to access the building unless you have a fob."

Back in Jan. 2020, a fire occurred in building complex. Residents sued the building, blaming inadequate fire equipment. The building had no sprinklers even though the same building burned seven years prior.

A dramatic fire erupted on the seventh floor of a high-rise apartment building on the Westside of Los Angeles on Wednesday morning, prompting a massive response from firefighters on ladder trucks and in helicopters.

Barraza says there appears to be faulty security equipment because when she asked about surveillance video, there wasn't any.

"They're not working, they're trying to get a bid, an estimate of how much it's going to cost to put in cameras," she says.

Eyewitness News contacted the building management regarding this but they say there is no comment at this time.

Barraza has hired an attorney. She feels there needs to be more security before something like this happens to someone else.