Caught on camera: Man bitten by bear during Fourth of July celebration on Mount Wilson 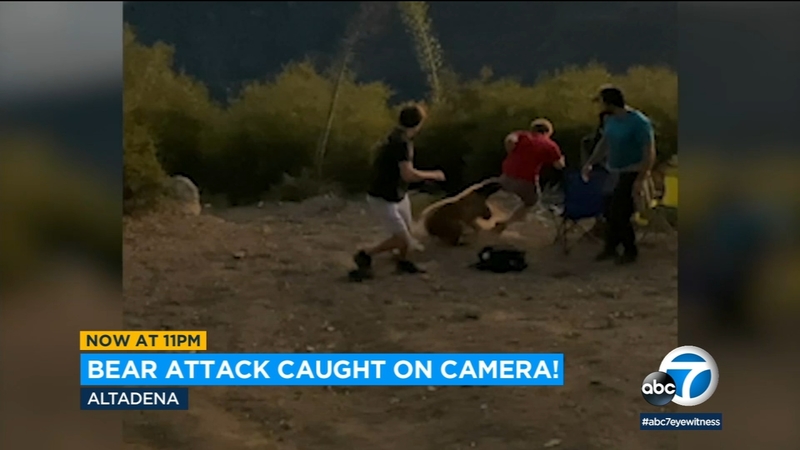 MOUNT WILSON, Calif. (KABC) -- Video shows the dramatic moment a bear attacked a man while he was celebrating the Fourth of July on Mount Wilson with a group of friends.

Photographer Ryan Duke says he was near the top of Mount Wilson with his friends to shoot photos of fireworks over Los Angeles County when a bear cub came out of the bushes and went straight to a nearby group and toward someone's backpack.

"At this point the group immediately reacted. Someone shouted 'bear,' got everyone's attention," Duke said. "I thought whoever shouted that was joking."

Most of the group stood their ground, Duke said, but two people turned their backs to run and apparently startled the bear. One person was bit by the small bear as he tried to run away, but appeared to have only suffered minor injuries.

"It nipped one of the men in the rear," Duke said.

The group continued to stand their ground as others looking farther away started to yell at the bear until it eventually left.

"I think it was really hungry and really wanted whatever was in that backpack," Duke said, adding that momma bear wasn't near the area.

Duke mentioned it's important to remember that we have to share the beauty of the outdoors with the native creatures.

"It's just a reminder that us humans are guests in these animals' homes, especially there," he said. "I wish the encounter hadn't happened because I'm sure that was a pretty scary experience for the cub."