Los Angeles firefighters appeared to have flames from a brush fire that erupted off the 405 Freeway in Bel Air under control Wednesday morning after the blaze scorched at least 50 acres.
KABC
By Marc Cota-Robles, Josh Haskell and John Gregory 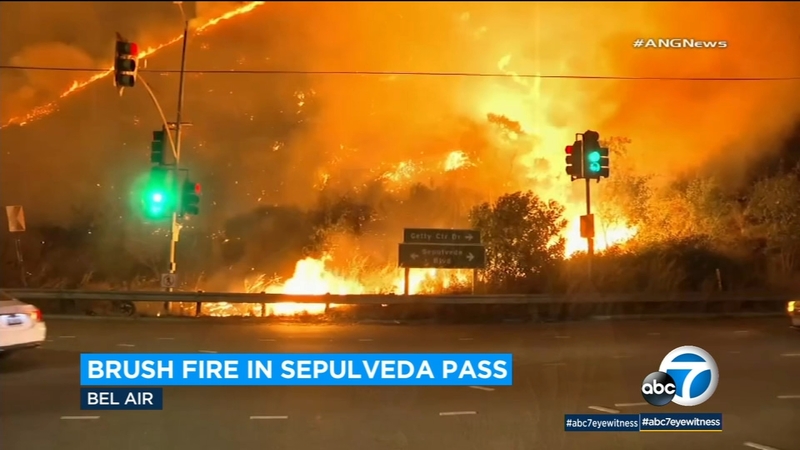 BEL AIR, LOS ANGELES (KABC) -- Los Angeles firefighters appeared to have flames from a brush fire that erupted off the 405 Freeway in Bel Air under control Wednesday morning after the blaze scorched at least 50 acres.

The fire in the Sepulveda Pass was reported at about 12:15 a.m. in the 1300 block of North Sepulveda Boulevard, east of the 405 Freeway near Getty Center Drive, according to the Los Angeles Fire Department.

AIR7 HD was over the scene as flames moved uphill in the area of a burn scar caused by the Skirball Fire in 2017, which started from a cooking fire at a homeless encampment. The inferno burned more than 420 acres, destroyed six structures and damaged 12 others.

LAFD said no structures were "imminently threatened," and no evacuation orders were issued during Wednesday's fire. The blaze, dubbed the Sepulveda Fire, was burning amid hot and dry conditions with winds up to 9 mph, officials said. Officials said containment was at 25% as of 8:30 a.m.

Fire officials described the blaze as a "dirty burn," indicating a mix of burned, un-burned and partially burned vegetation within the fire area.

Firefighters appear to have gotten the upper hand on a 50-acre brush fire that erupted off the 405 Freeway in the Sepulveda Pass.

By about 2:45 a.m., forward progress of the fire was stopped as about 200 LAFD firefighters worked to extinguish flames. L.A. County Fire crews and helicopters assisted in the firefight by ground and air.

At least two firefighters were hurt, but were evaluated for minor injuries and returned to battle the blaze.

Arson investigators arrived to investigate a possible point of origin for the fire.

After the fire first broke out, plumes of smoke billowed into the air and raging flames were seen on hills off the 405 Freeway before hand crews were able to get an upper hand on the flames.

The California Highway Patrol said both sides of the 405 Freeway will currently remain open, but the northbound freeway off-ramp at Getty Center Drive would be closed until LAFD operations would be completed.

Sepulveda Boulevard was closed in both directions near Getty Center Drive and drivers were encouraged to allow for extra time to travel through the area, officials said.

Southern California has been in the middle of a heat wave the last two days, prompting several brush fires in the area.

The blaze was burning in an area that has seen several other fires in years past. Last October, a fire erupted along the 405 in the Sepulveda Pass near the Getty Center, forcing thousands of evacuations. The Getty Fire burned more than 740 acres, destroyed 10 homes and damaged 15 others.