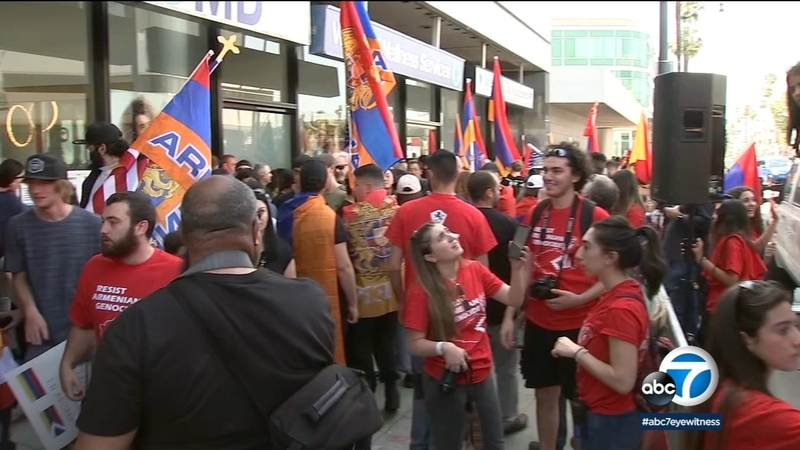 BEVERLY HILLS, Calif. (KABC) -- A large crowd gathered outside the Turkish Consulate in Beverly Hills Sunday calling on the Turkish government to acknowledge the mass killing of Armenians during World War I.

Hundreds gathered to mark the somber 107th anniversary of the beginning of the Armenian Genocide.

Due to the Armenian demonstration outside the Turkish Consulate on Wilshire Boulevard between La Cienega Boulevard and Le Doux Road, traffic will be impacted until at least 6:30 p.m., Beverly Hills police report.

Sunday's rally was sponsored by the Armenian Youth Federation, which says it's vital that their history is never forgotten.

April 24 is also observed throughout the Armenian diaspora, and is a holiday in Armenia and the Republic of Artsakh.

The Armenian Genocide began in 1915 and resulted in the deaths of as many as 1.5 million Armenians in a campaign blamed on Turkey's Ottoman government.

Armenian Americans will gather at several events throughout L.A. County Sunday to mark the 107th anniversary of the beginning of the Armenian Genocide.

In 2021, President Biden became the first U.S. president to formally recognize the atrocities as genocide.

Many who turned out for the rally Sunday say the ethnic cleansing continues in Artsakh, and in other areas of the world. They told Eyewitness News that the massive show of support is vital to making sure that history isn't repeated.

"This is a community gathering," said Hasmik Burushyan from the Armenian Youth Federation. "It's one, a space for us to mourn for the victims and the lives that were stolen by the Ottoman government, but also to celebrate that we're still here because it's also a testament that Turkey failed, and will continue to fail."

Los Angeles County is home to the largest population of Armenians in the United States, with an estimated 214,628 living in the county, according to the 2011 American Community Survey.
To honor the county's Armenian residents and their culture, the Board of Supervisors last month proclaimed April as "Armenian History Month" -- and, this week, also passed a motion declaring April 24 as "Armenian Genocide Remembrance Day in Los Angeles County."

The city of Glendale will hold its Annual Armenian Genocide Commemorative Event in-person for the first time in two years, at the Alex Theatre at 7 p.m.

The city said the program will allow people to experience a contemporary perspective of the genocide through music and dance. The program will feature the work of the Armenian priest Komitas through dance and musical performances curated by the Lark Musical Society. Tickets are free and can be reserved at itsmyseat.com/april24.

Also at 7 p.m. Sunday, St. Mary's Armenian Apostolic Church, at 500 S. Central Ave. in Glendale, will hold a concert dedicated to the martyr's of the Armenian Genocide and the 44-day war in the Artsakh.