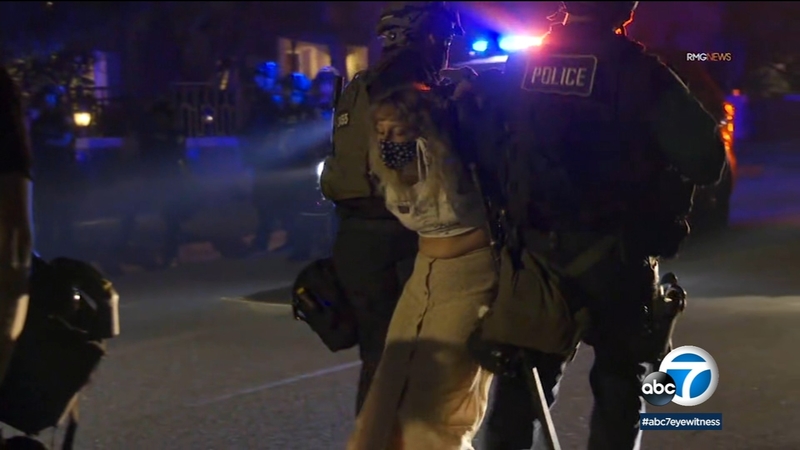 BEVERLY HILLS (KABC) -- Activists are speaking out against the Beverly Hills Police Department after they claim some people who were arrested during a demonstration were held for an excessive amount of time.

Police confirmed 27 protesters were arrested Friday night after they gathered for a peaceful protest against police brutality but ignored repeated orders to leave the neighborhood. All but one of them are facing misdemeanor charges of unlawful assembly and failure to disperse.

Activists then gathered outside the Beverly Hills police station on Saturday to demand their release, saying holding them until they could each post $5,000 bail was excessive and heightens the risk of getting sick amid the coronavirus pandemic. .

"Due to the number of people in custody, this is taking some time and the department has added additional staff to facilitate the process," department spokesperson Keith Sterling said in a written statement.

All who were arrested have since been released, according to the department.

Organizers say they've gathered in the city three times and claim police are using intimidation to try and keep them from coming back.

"They want to scare us, they want to push us into jail, they want to silence our voices... and they don't want us to come back but it's not going to work because you cannot silence the people's voices," said Gabriel Owens-Flores, who was among those arrested.

Officials in Beverly Hills rolled out an emergency order over the weekend, which bans most nighttime gatherings on residential streets and outlines new rules for protests going forward.

Earlier this month, the city of Beverly Hills issued an emergency order in response to a protest that "disrupted the tranquility" of a neighborhood.

Under the order, no more than 10 people may gather on a street, sidewalk or other public space from 9 p.m. to 8 a.m. every night until further notice.

Assemblies that are silent, such as candlelight vigils, and gatherings on private property are exempt. The order warned that violators can face arrest and be charged with a misdemeanor.