The jewelry store owners say the robbers got away with between $3 to $5 million dollars worth of jewelry.
KABC
By Leanne Suter 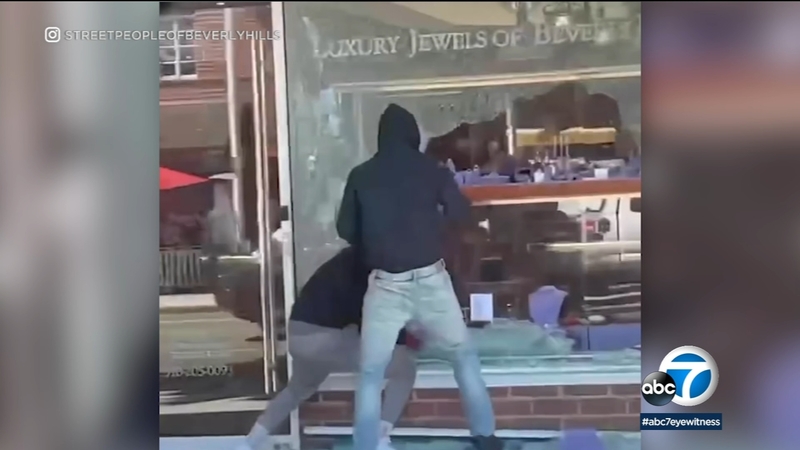 BEVERLY HILLS, Calif. (KABC) -- A jewelry store in Beverly Hills was hit by smash-and-grab robbers Tuesday who remain at large, according to police.

It happened at the Luxury Jewels of Beverly Hills on the corner of South Beverly Drive and Charleville Boulevard just before 2 p.m.

The group arrived in a stolen car but left it behind, police say, they then fled in an unknown vehicle.

Police believe the suspects were all men, though the investigation is in its preliminary stages.

Some were seen wearing hooded sweatshirts, sweatpants and "surgical-style masks," according to police.

The jewelry store owners told Eyewitness News that the robbers got away with between $3 to $5 million worth of jewelry. They said one necklace alone was worth nearly $500,000.

A next door business neighbor heard the commotion, and ran out to try to stop the suspects, but all of them managed to get away.

"I look outside, I see, there are five guys with sledgehammers, axes, hammers, they're banging on the window," said Wesley Aframian. "And you know, we're a jewelry store, they're a jewelry store. We're good friends with them. They're very good people. I just reacted and tried to stop them."

"I have one a nice kick, he lost his balance, he was falling over, and he started running," Aframian continued. "I pushed him on the street. He dropped a couple of the watches I was able to recover."

"Chief Stainbrook understands the community frustration regarding the crime that happened today at 203 South Beverly Drive. The Chief is willing to discuss with any person or group the reality of the current regional crime situation. Immediately, BHPD is adding a camera trailer, extra security patrols, and extra special watch from officers to South Beverly Dr. The Beverly Hills Police Department continues to hire new officers and engage new technologies to keep the City safe. The City and Department also need the help of the District Attorney's Office and our State Legislators."

The investigation is ongoing. Anyone with information is urged to contact police.