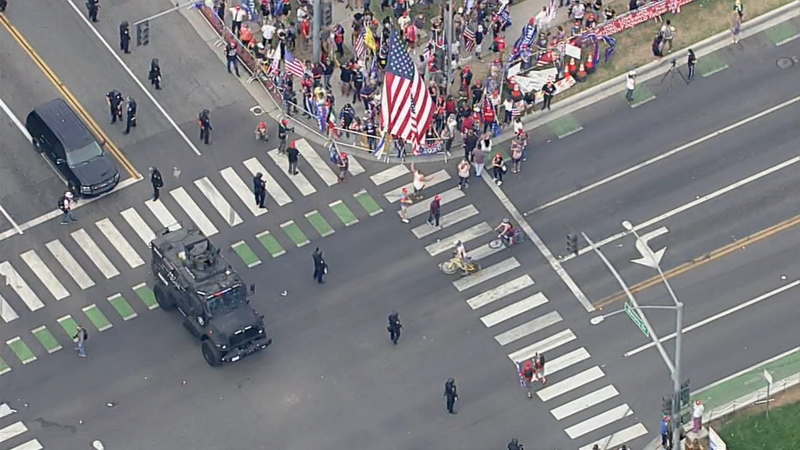 BEVERLY HILLS, Calif. (KABC) -- An unlawful assembly was declared by Beverly Hills police after a counter-protester reportedly got into a fight with a pro-Trump demonstrator near the Beverly Hills sign in Beverly Gardens Park, but no one was arrested, authorities said Saturday.

"Unlawful assembly has been declared near the Beverly Hills Sign. Avoid the area," BHPD announced shortly before 2:40 p.m. "Traffic is impacted. BHPD and mutual aid resources are on scene."

The unlawful assembly was declared about half an hour after police reported another demonstration at Roxbury Memorial Park at Roxbury Drive and Olympic Boulevard.

With less than a week until Election Day, the Beverly Hills Police Department and LAPD are taking steps to ensure safety for residents and businesses in the area.

"Approximately 40 protesters did assemble at Roxbury Park and then marched to the USA Freedom Rally,'' said Beverly Hills police Lt. Max Subin. "The protester from Roxbury Park got into a violent fight with a pro-Trump protester. It was at the point that an unlawful assembly was declared by the Incident Commander and the Roxbury Park protesters did leave and march back to Roxbury Park,'' Subin said.


Subin said there were no arrests.

An estimated 4,000 pro-Trump demonstrators participated in the Freedom Rally, police told media at the scene.

At 9:13 p.m., police reported that the Beverly Gardens Park demonstration was concluding.

Hundreds, if not thousands, of Trump supporters gathered near the Beverly Hills sign on Santa Monica Boulevard, with several of them waving American flags and pro-Trump banners. The rally was promoted on social media.
At least one armored police vehicle was there.


In recent days, Beverly Hills police have taken precautions ahead of Tuesday's General Election since the city has been a focal point for protesters on both sides of the political divide.

Workers have boarded up storefronts on Rodeo Drive and city officials said the world-renowned high-end shopping area will be off-limits to pedestrian and vehicle traffic on Tuesday and Wednesday in hopes of diverting any protesters or looters.

"As Election Day approaches and with the potential of increased demonstrations and protest activity across the region, the city is taking a proactive approach to ensure a safe community for residents, businesses and visitors,'' Beverly Hills Police Chief Dominick Rivetti said in a message to the community. "Beginning on Halloween and through election week, the Beverly Hills Police Department will be on full alert throughout the residential and business districts.''